If you were wondering about repairability when it comes to the 2018 MacBook Air with Retina display, its battery, trackpad and Touch ID can be replaced individually, instead of requiring a full top case enclosure, keyboard and trackpad like with its previous generation.

The news was spotted within Apple’s internal Service Readiness Guide, as reported by MacRumors (emphasis ours):

Big news for repairability and environmental responsibility: the battery can be individually replaced in the new MacBook Air, according to Apple’s internal Service Readiness Guide for the notebook, obtained by MacRumors.

The battery in the new MacBook Air is still glued into the top case, the aluminum enclosure that houses the keyboard and trackpad, but Apple will be providing Genius Bars and Apple Authorized Service Providers with tools to remove the battery and reinstall a new one with no top case replacement required. 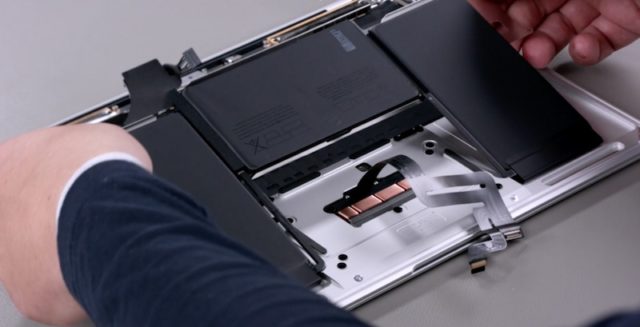 Once the battery is replaced by an Apple technician at the Genius Bar, it is then pressed back into place using the company’s iPhone display press tool, ensuring glue strips—which are the same ones used for iPhone batteries—are properly adhered.

The guide also says the trackpad, along with Touch ID can be replaced on its own, but for the latter, the MacBook Air must see a final step in passing Apple diagnostics to complete the repair. #becauchTouchID.

By allowing individual replacement parts instead of requiring multiple parts to be replaced on the 2018 MacBook Air, Apple may be hedging its bets in the event Right to Repair legislation is ever passed at some point in time. It could also mean Apple wants to have less of an impact on the environment, by not having perfectly working components wasted in order to repair a single part, such as a battery.

We should find out more details on the “repairability score” of the 2018 MacBook Air with Retina display, when the surgeons at iFixit dismantle the new laptop.