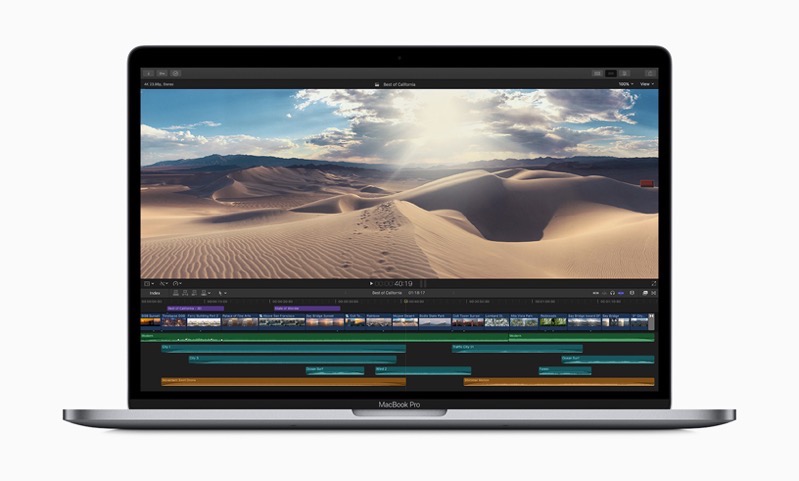 The company is touting 2x faster performance than quad-core MacBook Pro models and a 40% increase in performance versus 6-core models, making for “the fastest Mac notebook ever.”

“Whether it’s college students mastering a course of study, developers building world-class apps or video editors creating feature films, we’re constantly amazed at what our customers do with their MacBook Pro,” said Tom Boger, Apple’s senior director of Mac Product Marketing, in a press release. “Now with 8-core processors for an incredible performance boost, along with its stunning Retina display, fast storage, all-day battery life and running macOS, MacBook Pro continues to be the world’s best pro notebook and we can’t wait to get it into our customer’s hands to see what they do next.”

Apple says compared to the previous quad-core 15-inch MacBook Pro, the company says “Music producers can play back massive multi-track projects with up to two times more Alchemy plug-ins in Logic Pro X,” and
“3D designers can render scenes up to two times faster in Maya Arnold,” for example, as evidence of new two times faster performance across pro apps.

Update: According to Six Colors, Apple has tweaked the butterfly keyboard again:

Apple says these new models also feature a fourth version of the butterfly keyboard design, in response to customer complaints that the keyboard would end up in a sad state where key presses were ignored or doubled. While Apple is quick to say that the vast majority of MacBook Pro customers haven’t experienced any keyboard issues, the company still keeps tweaking this design. It claims that the change made in these new MacBook Pro models will substantially reduce the incidence of ignored or doubled characters.

Click here to buy the new MacBook Pro with faster processors—prices start at $2,399 in Canada.