Apple has launched a new trade-in program in Canada, offering credit to customers who want to trade in their existing Mac or PC, with values up to $2,000 available:

Simply tell us about your current Mac or PC to get an estimate. Then mail in your computer for free and choose how you’d like to receive your credit — with an Apple Store Gift Card, a MasterCard gift card or a deposit in your PayPal account. It’s that easy. 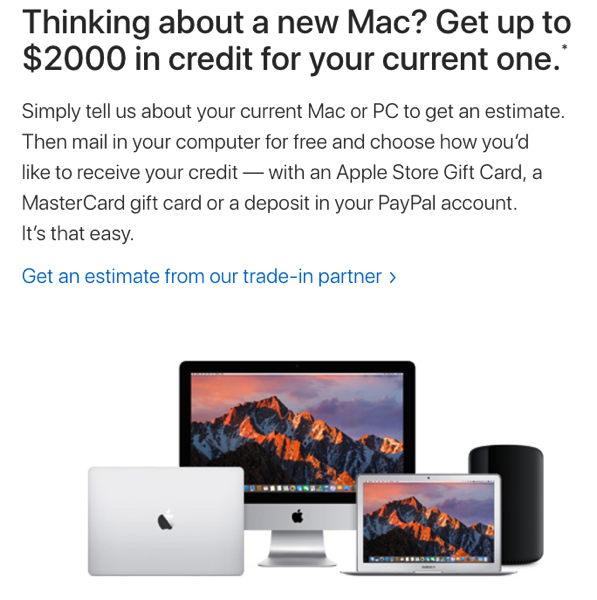 Apple says once you use their online estimator tool (operated by third party Phobio), you then mail in your computer for free (they’ll send you a prepaid mailing label in 3-5 business days), and get your credit in either an Apple Store gift card, MasterCard gift card or a PayPal deposit.

Obviously, when it comes to these trade-in programs, values are not even close to what you could get versus selling on Craigslist, Kijiji or eBay, but for some people, they can’t be bothered to go through the hassle of posting ads and wasting time with tire kickers. These people are the target market for these types of trade-in programs.

Here are some estimated trade-in values, which will be dependent on the condition and model of your computer:

Apple has an existing trade up program for iPhone, which offers up to $340 for your old device, in the form of Apple Store instant credit, or an Apple Store gift card.