Fantastical 2 for Mac OS X Yosemite Launches, On Sale for 20% Off

If you’re a fan of Fantastical 2 for iPhone or iPad, then you’ll be happy to know Fantastical 2 for OS X Yosemite has launched today, which you probably have seen from the bevy of reviews that have splashed the web. 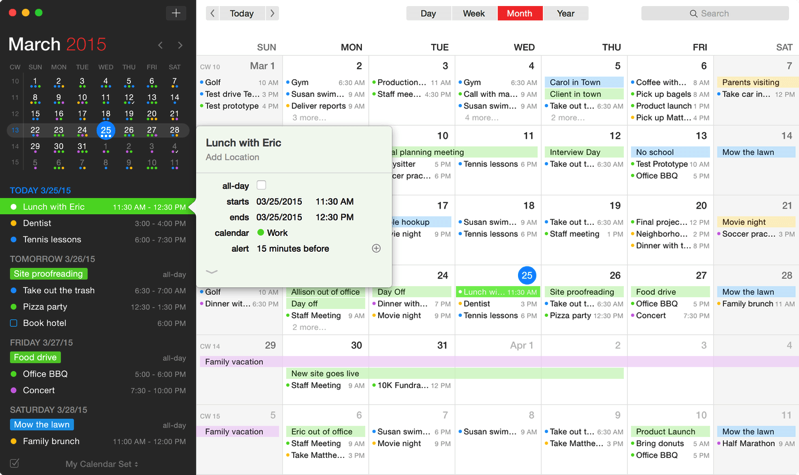 • Beautiful, all-new design exclusively for OS X Yosemite
• Full calendar window with Day, Week, Month, and Year views
• OS X Yosemite Today Widget, Action Extension, and Share Extension
• Handoff support between Fantastical 2 for Mac, Fantastical 2 for iPhone, and Fantastical 2 for iPad
• Calendar sets – quickly toggle multiple calendars on or off with a simple click or automatically when you leave or arrive, based on location
• Maps are now displayed for your locations
• Improved iCloud reminders with a separate reminders list and support for geofenced location-based reminders
• Multiple parser improvements including improved repeating event and reminder support, the ability to add alerts (like “Meeting 3pm alert 1 hour”), time zones, and many other improvements
• Time zone support including floating time zone support
• Dark and light themes

Check out the video of what’s new below (their YouTube channel has a tonne of videos on this release):

For an in-depth review of Fantastical 2 for Mac, check out this massive look from MacStories.

Fantastical 2 for Mac looks pretty gorgeous and powerful, but at the price of $46 CAD (includes a 20% off launch sale price), you need to consider if that’s worth it for you, over free options such as Google Calendar or something like Sunrise for Mac.

Call me old school but I’m all-in with Google Calendar on my Mac and Readdle’s Calendars 5 on my iPhone and iPad. What’s your OS X calendar of choice right now?