Apple introduced its most radical Mac ever, the all-new Mac Pro last month with an expected release sometime in December. Apple highlighted that the new Mac Pro will pack up to 12-core Xeon CPUs, dual FirePro GPUs, ultra-fast ECC memory, new PCIe flash storage and Thunderbolt 2 expandability. While the Geekbench database already has benchmark entries from a 12-core 2.7 GHz Xeon and an 8-core 3.0 GHz Xeon Mac Pro, a third entry has now shown up revealing the 6-core 3.5 GHz Xeon CPU, that will also be an option in the new Mac Pro (via MacRumors). 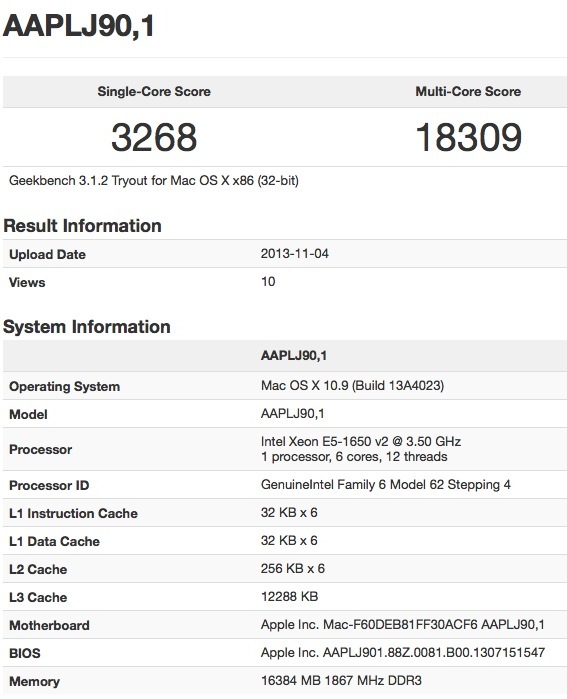 The source points out that much like previously seen machines, this new 6-core Mac Pro is also running a custom version of OS X Mavericks, build 13A4023. The machine’s appearance leaves only the “entry-level quad-core 3.7 GHz Xeon E5-1620 v2”, never previously seen in Geekbench database.

“While both the 6-core and 8-core machines were tested using Geekbench 3.1.2 in 32-bit mode, which allows for direct comparison of their benchmarks, the 12-core Mac Pro was tested using Geekbench 2.4.3, which used a different baseline and means that scores can not be directly compared. But between the 6-core and 8-core machines, the two unsurprisingly show similar single-core scores of around 3300 in Geekbench 3, while the newly surfaced 6-core machine sees a lower multi-core score of 18309 compared to the 24429 seen on the 8-core version.”

Benchmarks aside, have you seen concept designer Martin Hajek’s imagination of a Gold Mac Pro yet?