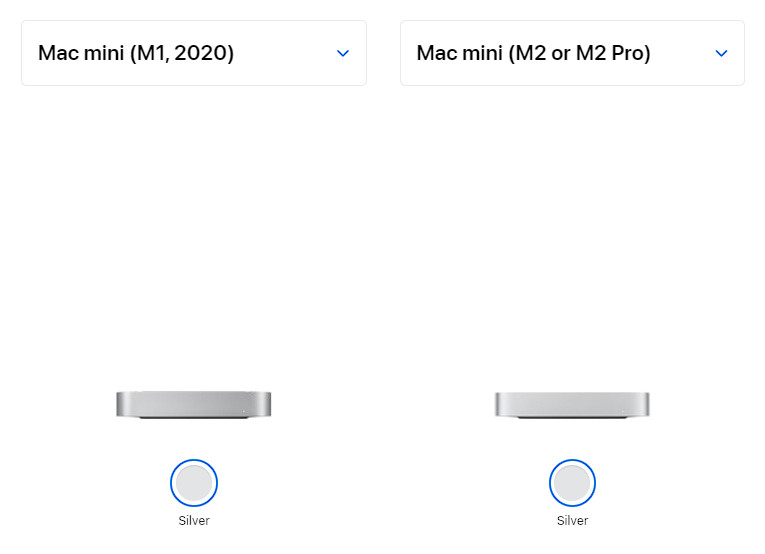 Apple today unveiled its refreshed 2023 Mac mini, with a choice between the tech giant’s M2 and all-new M2 Pro chips. The new model directly succeeds the 2020 Mac mini, which was the first of the company’s small form factor Mac desktops to feature Apple Silicon in the M1 chip.

While the Mac mini’s form factor and physical footprint remain almost identical (this year’s model does appear to sport a slightly different shade of silver), there are plenty of changes on the inside.

Both Mac mini models offer a maximum of 2TB of internal storage. Options include 256GB, 512GB, 1TB, and 2TB.

While the 2023 Mac mini does have 4TB and 8TB SSD options, they are limited to configurations with the M2 Pro chip.

Both Mac mini models support up to two displays.

Like the 2020 Mac mini, the 2023 Mac mini also sports two Thunderbolt/USB 4 ports, two USB-A ports, and an HDMI port. Unlike its predecessor, however, the new M2 Mac mini offers an optional upgrade to a 10-gigabit ethernet port.

When Apple announced the M1 Mac mini in 2020, the company dropped its starting price to $899. The M2 Mac mini keeps that trend alive this year, further slashing its sticker and launching at a starting price of $799.

Apple’s new 2023 Mac mini with M2 and M2 Pro is available to order today on Apple.ca, with an official launch and in-store availability slated for Tuesday, January 24.