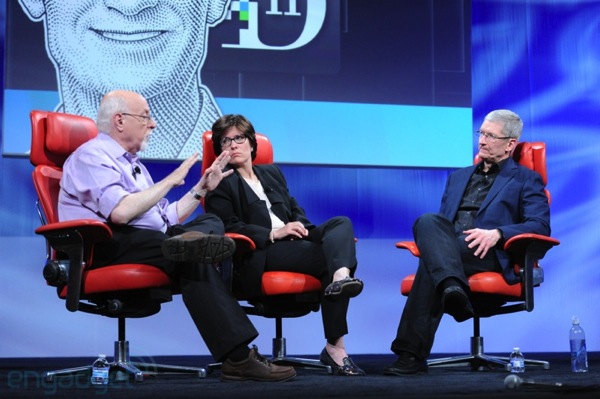 We’ve long heard about the drastic shift coming in iOS 7, now that Apple design chief Jony Ive is at the helm of the mobile operating system. At D11, Kara Swisher pressed Cook about the upcoming changes in iOS and he revealed Jony Ive has played a key part in the revamp (via Engadget’s Live Blog):

Swisher: “Is it a dramatic update for iOS?”

Cook: “I’ll let you be the judge of that, and yes, Jony Ive has been really key [to this version.]

Swisher went on to ask about Scott Forstall, the former iOS chief let go by the company over the debacle with Apple Maps. Cook did not mention Forstall by name but stressed the changes were made to “tighten the groups even more” at Apple:

Cook: “I don’t want to talk about anyone in particular except for those who are there. The whole concept was to tighten the groups even more, so we could spend more time finding magic in intersections. Seven months later, give or take, I think it has been an incredibly great change. Craig is running both iOS and OS X. This has been fantastic. Eddy Cue is focused on services. These changes have been great — really, really great.

Did Tim Cook Hint Apple is Making an iWatch instead of iGlasses?

Walt Mossberg asked Cook about Google Glasses and what he thought the impact would be of upcoming wearable technology. Cook responded the following about glasses in general:

Cook: “I wear glasses because I have to. I can’t see without them. People generally want glasses to reflect their fashion, their style and so forth. From a mainstream point of view, this is difficult.”

Mossberg then steered Cook towards the wrist, which the latter said “is natural”:

Mossberg: “But, the wrist is not?”

Cook: “I think the wrist is natural.”

Cook: “I think there are other things in the space that could be interesting. Sensors are exploding. With the arc of time, it’ll become clearer.”