As reported by PatentlyApple, the US Patent and Trademark Office published an interesting patent for Apple that reveals a new wireless remote for a vehicle’s steering wheel.

Taking cues from the iPod click wheel, but offering touch-sensitivity, the remote wirelessly controls an iOS device that is in a vehicle. With many laws now forbidding the use of mobile devices when driving, many technologies such as Bluetooth and wireless remotes have become extremely popular. 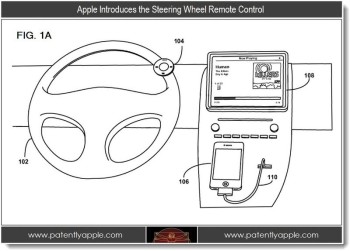 There are also many accessories that enable users to operate their iOS devices hands-free in a vehicle. In my car, for example, I use the auxiliary jack to plug in my iPhone, however that is not hands-free and I have to manually control my music. This remote will eliminate me having to touch my iPhone and I can keep both hands on the steering wheel.

Aside from offering touch-sensitive wireless controls, the remote’s faceplate can be rotated and the clips can be moved to adjust to different steering wheels. 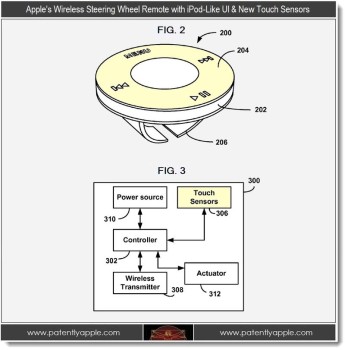 Overall the device looks exciting and I wouldn’t mind having it on my steering wheel to control my iPhone. Ideally I’d like Apple to just build a steering wheel with built-in iOS controls, but I’ll take this too.