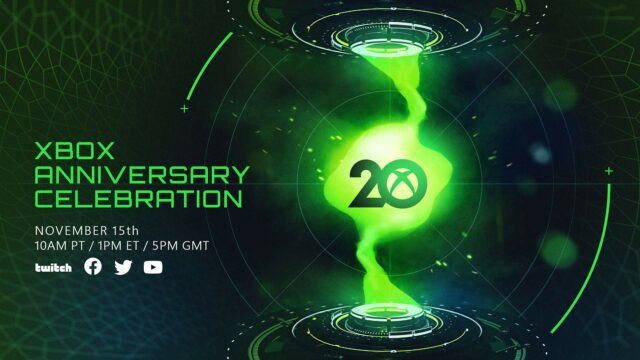 Today marks the 20th anniversary of the original Xbox console and Microsoft is hosting a celebration live stream to commemorate the occasion.

On November 15, 2001, Microsoft launched the original Xbox in North America. It was the company’s first foray into the console market, entering the space alongside Sony’s PlayStation 2 and Nintendo’s GameCube. It was also the first American console since the Atari Jaguar. Microsoft also debuted Halo: Combat Evolved, the first entry in the long-established Halo franchise, on the same date.

Microsoft is now hosting a special ‘Xbox Anniversary Celebration’ and looking back at 20 years of the brand. As detailed in a blog post, the event will celebrate the brand’s “favourite moments from the past 20 years of Xbox.” As far as what to expect from major reveals and announcements, Xbox’s Aaron Greenburg has already confirmed that the live stream will not be focused on being a “news beat or for any game reveals.”

Note this is a celebration stream the team has put together for our 20th Anniversary, so not designed as a news beat or for any game reveals.

That said, there is the possibility of a few surprises along the way. While game reveals are out of the question. It’s within reason that Microsoft makes some exciting announcements on new Xbox Game Pass titles hitting the service. Additionally, with the launch of Halo Infinite on December 8, perhaps a new look at the game will be shown.

On top of that Pablo Schreiber, who is set to play Master Chief in the upcoming Halo series for Paramount+, has teased that “something very exciting” is happening today. Perhaps Microsoft will take a moment to show the first trailer or first official look of Schreiber in the Mjolnir suit today.

The Xbox Anniversary Celebration kicks off at 1 PM ET/ 10 AM PT. You can tune into the event by checking out the Xbox YouTube, Twitch, or Facebook channels. Microsoft will also be supporting various subtitles and ASL options for viewers. A VOD will be made available following the live stream as well.