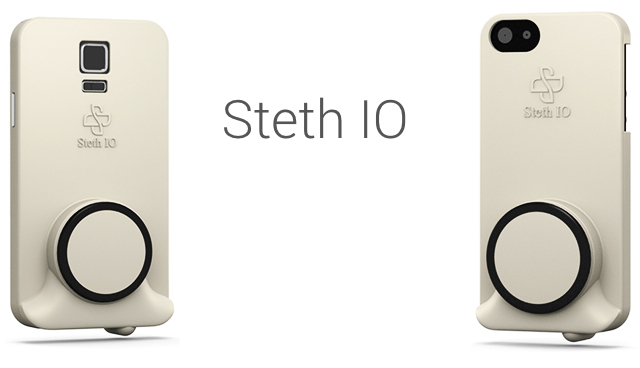 Suman Mulumudi, a 15-year-old inventor, who along with his father and cardiologist Mahesh Mulumudi, has developed a working stethoscope powered by an iPhone or Android smartphone, recently showcased his invention on The Tonight Show with Jimmy Fallon (via TUAW). Dubbed the Steth IO, it works similar to that of a regular stethoscope, capturing the sounds of a beating heart.

“Mulumudi and his father are developing this stethoscope, along with LesionSizer, a device that reduces unnecessary stents in angioplasty, as part of a startup company called StratoScientific. StratoScientific recently won first place at the recent WTIA Spring First Look Forum, beating out 14 other startups.”

The iPhone fits into a case with a diaphragm. The sound is routed through a channel that directs it to the iPhone’s microphone. An associated app can then record the heartbeat sounds and display the individual heartbeats on the smartphone’s display.

Take a look at Mulumudi showing off Steth IO in “Fallonventions” segment of Jimmy Fallon’s show:

SaskTel has announced the expansion of its 5G network to a number of rural communities, including the Town of Lumsden. With its hyper-fast data speeds, SaskTel’s 5G network is bringing a new level of wireless connectivity to residents and businesses across Saskatchewan. “Saskatchewan people will continue to benefit from some of the best communications technologies...
Usman Qureshi
5 mins ago

Last fall, Apple Music was named the new partner for the NFL’s Super Bowl Halftime Show, replacing Pepsi. This year’s show will feature Rihanna and Apple Music today shared the first trailer for the show, slated for the Super Bowl on Sunday, February 12, 2023, at State Farm Stadium in Glendale, Arizona, where the Kansas […]
Gary Ng
56 mins ago