Market statistics published in comScore’s 2017 U.S. Cross-Platform Future in Focus Report suggest that tens of millions of legacy iPhone users are primed to upgrade this year, lending credence to speculation of a coming iPhone “supercycle”, AppleInsider is reporting. Coined by industry analysts, the coming iPhone “supercycle” is best described as a sudden upwelling of demand following a comparatively weak fiscal 2016. 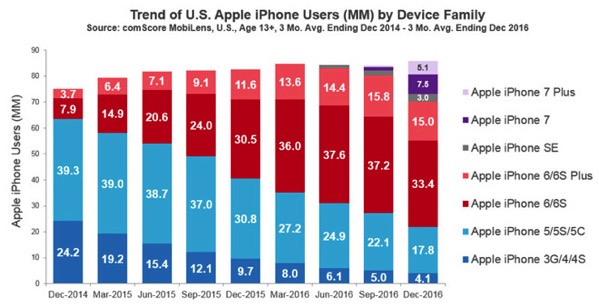 According to comScore MobiLens data, Apple’s iPhone 7 and 7 Plus accounted for 15% of the estimated 85.8 million U.S. iPhones in operation as of December. Nearly 48.4 million people were using iPhone 6 series devices at the end of 2016, while another 21.9 million owned an iPhone 5s or older during the same period. “A healthy portion of the collective 70 million iPhone users will buy Apple’s latest and greatest device, representing a huge windfall for the company”, notes the source.

As presented in the graph above, iPhone ownership tends to surge in the fall quarter when new models are released and older versions are afforded price drops. Apple helped upend its own smartphone sales model when it introduced a phablet device in the iPhone 6 Plus in 2014, creating an even larger iPhone user demographic that swelled to 53 million combined iPhone 6 series owners in September 2016.

Though iPhone 6 marketshare is slowly decaying, especially as existing users update to iPhone 7, there remains a strong contingent who have held on to older hardware. Along with new converts, owners of legacy iPhones are widely expected to fuel a so-called “supercycle” when Apple releases its next-generation handsets this fall.

Apple is expected to introduce not only an updated iPhone 7 series hardware this year, but also a completely new 10th anniversary smartphone dubbed the “iPhone 8”.