In his recent research note, analyst Ming-Chi Kuo from KGI Securities has shared some new details regarding the widely rumoured 6.1-inch iPhone, which he expects to release in the second half of 2018 (via MacRumors). The mid-range iPhone is said to feature Face ID similar to the iPhone X, a TFT-LCD display with an aluminum frame, a single-lens rear camera and no 3D Touch. 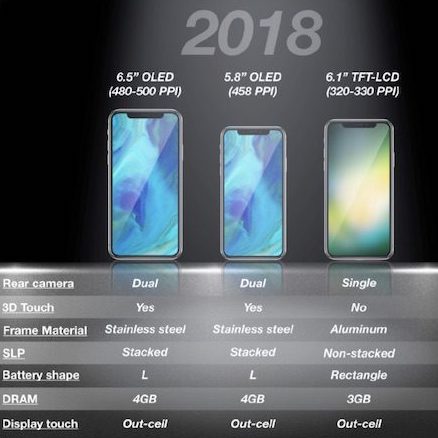 Furthermore, Kuo predicts that the device will be priced between $700 and $800 in the U.S. and that it will be announced around September-October alongside a new 5.8-inch iPhone X and a larger 6.5-inch version called the ‘iPhone X Plus’.

Below is an excerpt from his research note:

Development schedule of new 6.1″ LCD iPhone slightly behind 6.5″ and 5.8″ OLED models, but it may enjoy extended longevity into 1H19F, boosting slow season outlook: We predict the 6.1″ LCD iPhone will differ from the 6.5″ and 5.8″ OLED models in terms of certain specs, for reasons of cost/price and product segmentation. However, this shouldn’t have any effect on key user experience. We revise up our price projection for the 6.1″ model from $650-$750 to $700-$800, and remain positive on shipments momentum.

Kuo says the 6.1-inch iPhone will account for almost 50% of the new iPhone lineup’s shipments.