KGI Securities analyst Ming-Chi Kuo’s has claimed in his latest note to investors that Apple will release three new iPhone models in 2018, including a 6.5-inch OLED iPhone and a 6.1-inch LCD iPhone, both of which will be the biggest handsets ever released by Apple, AppleInsider is reporting.

The analyst notes that the larger OLED model would presumably serve as a sort of “iPhone X Plus” featuring an edge-to-edge display and the general size of a Plus-sized iPhone. 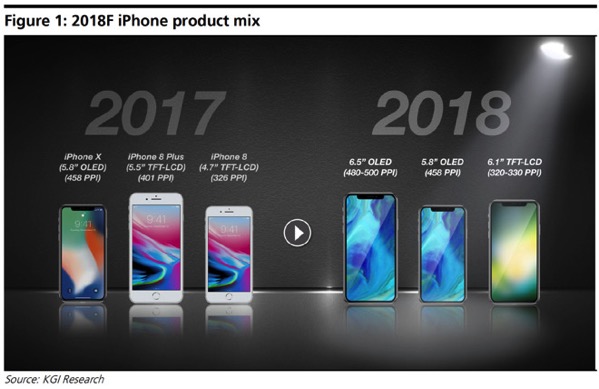 Kuo added that in order to target the low-end and mid-range smartphone markets, Apple is also working on a new LCD model with a large 6.1-inch display, which will “differ significantly” from the OLED models. This LCD model will feature a lower-resolution display to achieve a price point between $650 and $750, although it is likely to feature Face ID and advanced cameras similar to the iPhone X or iPhone X Plus. He further said that Apple will greatly reduce the bezels on this LCD model.

These two handsets will be flanked by a next-generation iPhone X, he said, featuring the same 5.8-inch edge-to-edge OLED display as the recently released model. With three new handsets apparently in the works for late 2018, the analyst predicts that Apple will see a “super-cycle” of sales, aided by the fact that the company’s supply chain will be better suited to handle manufacturing of the new technologies introduced in the iPhone X.

For reference, the current iPhone X has a 5.8-inch OLED display, whereas the iPhone 8 Plus has a display size of 5.5 inches.