Apple’s App Store Distribution page has been updated to reflect new iOS usage numbers, and as measured by App Store usage on October 27, 2014, iOS 8 is now on 52% of devices, finally surpassing iOS 7, which now stands at 43%. 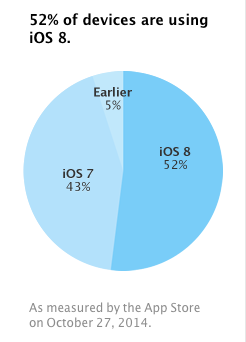 The company previously detailed at its October Special Event iOS 8 had reached 48% of devices, and in twelve days that number has risen to 4% (whereas previously it took two weeks to reach 47% due to an iOS 8.0.1 SNAFU), most likely thanks to iOS 8.1 bringing the launch of Apple Pay plus more Continuity features like Handoff and SMS Forwarding and more.

Have you updated to iOS 8.1 yet? There are still numerous bugs that need to be fixed, related to auto rotate, muting of videos during playback, copy and paste and more.