Apple’s App Store Distribution page has been updated to reflect the numbers we saw announced on stage by Craig Federighi: 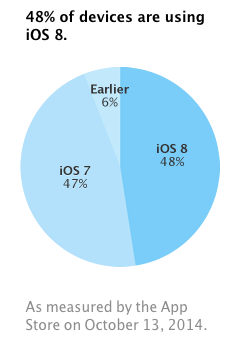 Apple also made it clear for everyone out there iOS 8 was able to reach a 48% installed base after 26 days, compared to Android’s KitKat, which only has reached 25% of users after 313 days–well played, Apple.

Ten days ago, iOS 8 adoption was only at 47% of devices, a 1% increase after two weeks, seen as a modest jump given bugs with the previous iOS 8.0.1 SNAFU.

With today’s release of OS X Yosemite and iOS 8.1 coming out on Monday, you can bet the numbers will increase as users will require the latest mobile operating system to take advantage of Continuity features such as Handoff.

On Saturday evening there was a Twitter Spaces hosted by Mario Nawfal along with Kim Dotcom, which Elon Musk joined in from using Starlink on his private jet as it took off. The topic was to cover the Twitter Files shared by the social network recently, but Musk also talked about various issues, including advertising […]
Gary Ng
58 mins ago