For the first time in nearly 5 months, Apple has today released updated iOS 15 installation numbers revealing the percentage of compatible devices running the latest version of iOS just ahead of the upcoming WWDC event (via MacRumors). 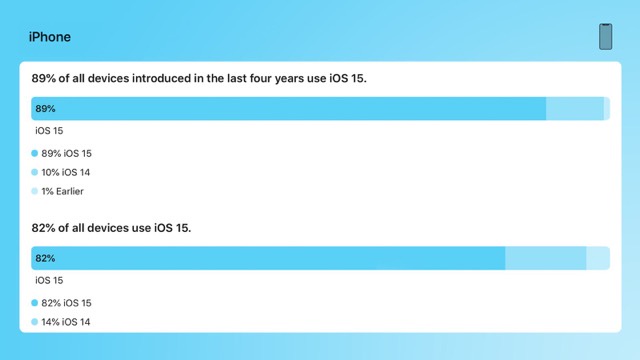 According to the latest numbers, 89% of all iPhones introduced in the last 4 years are now running iOS 15, 10% of iPhones are still running iOS 14, and 1% of devices are still on an earlier version of iOS.

Apple has also released the data for iPhones released more than 4 years ago, which shows that 82% of those devices are running ‌iOS 15‌, 14% are running iOS 14, and 5% are running an older iOS version.

Apple is expected to introduce iOS 16 and iPadOS 16 at next week’s WWDC22 event, which kicks off on June 6 at 10am PDT.