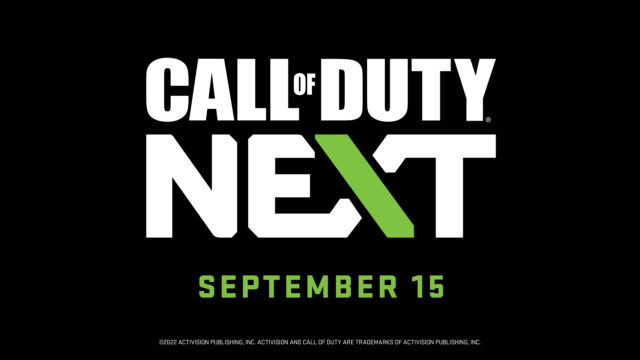 Activision has revealed when it plans to divulge more information on the new entry of the mega-franchise, Call of Duty. On September 15th, developers Infinity Ward will unveil new details regarding Call of Duty: Modern Warfare 2, Warzone 2.0 and Warzone Mobile.

Fans of the franchise have been patiently waiting to learn what is in store for Call of Duty: Modern Warfare 2. As a follow-up to the well-received Modern Warfare reboot of 2019, many are hoping Infinity Ward can deliver on bringing a blockbuster campaign as well as a well-rounded and balanced multiplayer experience. Call of Duty: Next aims to highlight what its upcoming games will include. The Call of Duty team states that it will be an “era-defining, livestream franchise event.”

Activision and Infinity Ward previously revealed at Call of Duty: Modern Warfare 2 will launch on October 28th, 2022. Earlier this year, we got a chance to see the gameplay of one of the game’s campaign levels. However, much of the game is still shrouded in mystery. This is especially true when it comes to the multiplayer suite, which for all intents and purposes drives engagement every year.

In addition, Activision has confirmed that Warzone 2.0, the new installment of the popular battle royale game, is arriving this year at a later date. As it is being treated as a revamp of the current Warzone experience, the slate is being whipped clean. Although there are bound to be mechanics and gameplay similarities, we don’t know what Warzone 2.0 will be in its entirety. Likewise, mobile players are eager to hear more about the Warzone experience designed for smartphones.

There’s a very good chance we’ll see Infinity Ward showcase a lot of the multiplayer maps for Call of Duty: Modern Warfare 2. We may also receive a release date for Warzone 2.0 and details regarding the new weapon offering and progression system. Plus, it’d be nice to get some gameplay and release info for Warzone Mobile.

Pre-Order now for early access to the #MWII Open BETA!

Call of Duty: Modern Warfare 2 and Warzone 2.0 are due to arrive on PlayStation 5, PlayStation 4, Xbox Series X/s, Xbox One, and PC. Warzone Mobile will arrive on iOS and Android at an undisclosed time.