Air Canada has updated their iOS app with some enhancements and bug fixes, highlighted by Passbook electronic boarding passes now auto displaying after you’ve checked in. Once users check-in within the app and your Passbook boarding pass is saved, it will now appear on your lock screen.

Other enhancements include the disabling of auto correct on certain fields during check-in plus the addition of the numeric keyboard on relevant fields. A new feature is a checked baggage allowance calculator, plus other fixes for iOS 7.

What’s New in Version 3.19
PASSBOOK AUTO DISPLAYS AFTER CHECK-IN
– Your Passbook Electronic Boarding Passes will now appear automatically after you complete your Mobile Check-in! Just tap ‘Add’ to save it in your Passbook so they appear on your lock screen and can be used offline.

CHECKED BAGGAGE ALLOWANCE CALCULATOR
– We’ve added a handy checked baggage allowance calculator to our app. You can find it by accessing the ‘More’ tab.

In iOS 8, users can expect the system to take advantage of your location data to prompt you to launch relevant apps. Below, iPhoneinCanada.ca reader Jonathan shows us how while at Pierre Elliott Trudeau Airport in Montreal, his iPhone running iOS 8 beta asked him to launch the Air Canada app, as noted by the icon in the lower left hand corner (the app didn’t launch but the camera did, most likely as the feature is still being implemented): 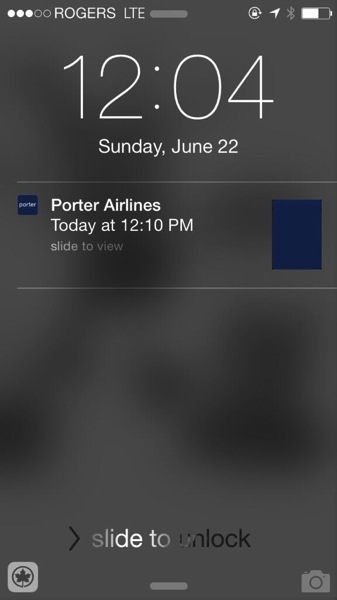 Air Canada first added Passbook support to its app back in October 2012.