Air Canada has quietly added Passbook support for boarding passes. Passbook is Apple’s new ticket repository that debuted with iOS 6. Essentially it stores all your coupons, gift cards, passes, movie tickets and anything else that has a barcode.

According to iPhoneinCanada reader @aaron604, existing customers that purchase airline tickets are sent unique URLs via text message. Upon visiting these URLs, you’re directed to a page where a Passbook version of your boarding pass appears on the screen with the option to ‘add’ it. Once added, the ticket sits within Passbook and is ready to be used. Aaron did note he did not get a boarding pass notification when he got to the airport.

We tested the unique URL Aaron was sent from Air Canada and we were able to add the ticket into Passbook ourselves. Below on the left is what Air Canada users can use as part of a web check-in for boarding passes–compare that to the lovely Passbook image on the right: 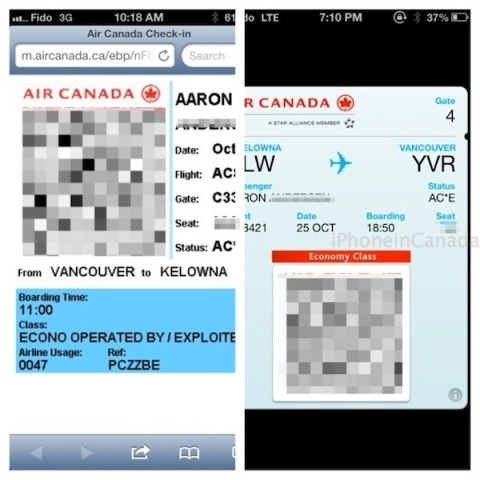 After tapping the URL Air Canada texts you, the screen below will appear–your Boarding Pass with the option to ‘Add’ to Passbook: 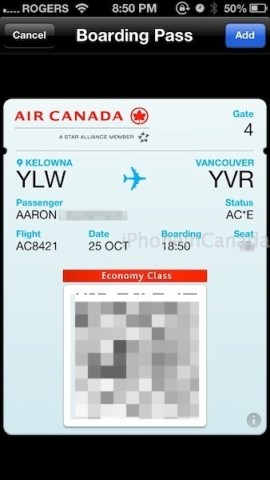 Here’s how the Air Canada board pass looks within Passbook (you can see my Starbucks Card at the bottom too). If you click on the ‘more info’ icon, it reveals your booking reference number and e-ticket number. 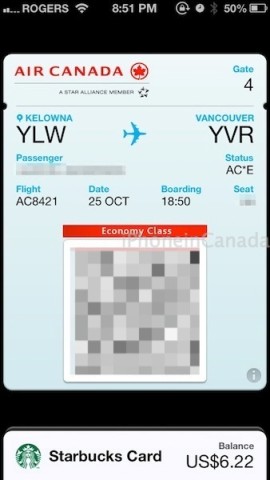 Porter Airlines was the first airline in Canada to integrate Passbook. You can bet other airlines are busy integrating Passbook as well.

We haven’t heard of any official Air Canada announcements on this yet. If anyone out there is flying Air Canada soon, let us know if you were able to integrate your boarding pass into Passbook.

Update: Air Canada responded to us and noted the following regarding Passbook support:

Air Canada is among the first airlines to support Passbook. Air Canada’s integration with Passbook will further simplify the customer’s travel experience and maintain Air Canada’s position as a top innovator in the Airline industry.

Air Canada noted they have submitted a new version of their app to the App Store for approval to allow for boarding passes to be downloaded from within right to Passbook. Another update is coming to in a few weeks to add Lock screen support (which we noted was absent) based on relevant time settings, with further Passbook enhancements coming in 2013. Below is an official image of Air Canada and Passbook: 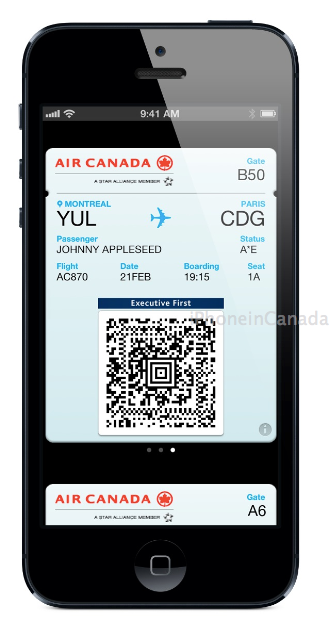 SkipTheDishes has today announced the launch of its new 'Do Good Deal' offer on the largest food delivery network in Canada. Piloting at participating restaurants in Winnipeg and Vancouver, this menu add-on allows restaurants to offer customers exciting end-of-day discounts on unsold menu items. The Do Good Deal offer is a new addition to SkipTheDishes' offerings...
Usman Qureshi
7 mins ago

DoorDash and Wendy's Canada have announced a new nationwide partnership to deliver consumers their favourite menu items from the comfort of their homes. Available at over 300 restaurants across the country, Wendy's lovers can now order the iconic Baconator or Classic Frosty through DoorDash Canada. "DoorDash is providing Canadians a convenient and accessible way to Dash...
Usman Qureshi
15 mins ago

Ottawa-based lawyer Darius Bossé has filed a case against the federal government over the ArriveCAN app not allowing iPhone users to choose whether they wanted to use French or English as their official language — reports the CBC. ArriveCAN was built as a mandatory tool for travellers to submit COVID-19 vaccination proof and other health information...
Nehal Malik
15 mins ago