Apple has launched in-store pick up for AirPods at retail stores in Canada, with Vancouver postal codes noting a pick up date of February 15th, 2016. 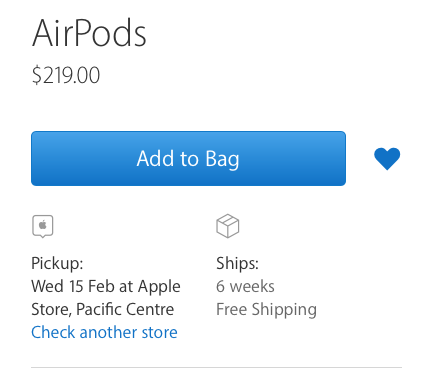 Online orders are slated for delivery in “6 weeks”, but knowing Apple this timeframe could improve. By ordering for in-store pick up, you can reserve a pair of AirPods online, to then retrieve at a location of your choice.

Let us know if you’ll be making a reserve and pick up for AirPods—they won’t be available until the middle of February, though, a similar timeframe for the U.S., which launched in store pick up yesterday.