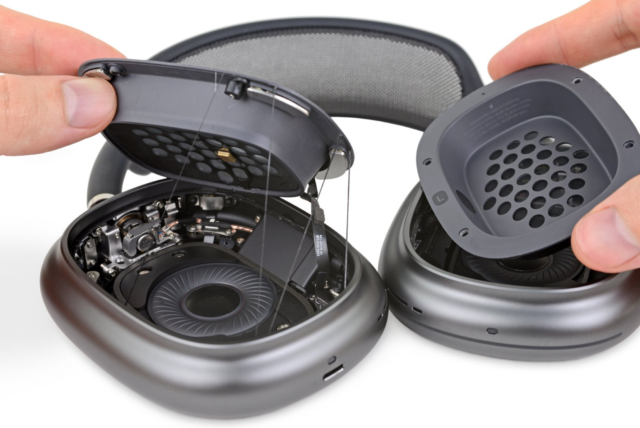 While the full teardown is still on the way, the outlet wanted to see if the latest edition to the AirPods family were any more serviceable than its smaller counterparts.

Right from the start, iFixit discovered that it takes quite a lot of work to even open up the super-expensive headphones. While unusual for this kind of audio accessory, it’s pretty much on par with Apple’s repair practices so it’s not exactly a surprise. The teardown and repair experts have just scratched the surface, but the signs don’t seem to look good when it comes to third-party repairs.

As part of the teardown, iFixit X-rayed the new headphones. That revealed a few interesting insights, such as the fact that both battery cells are in the same ear cup, while the opposite ear cup just has empty space.

Initial inspection of the headphones also showed “no obvious connectors,” which would make it easy to swap out batteries. However, these could be hidden. Replacing the batteries is no easy job, though. While there are “friendly screws” which suggest it can be opened, the disassembly process involves melting parts that have been glued in place.

While it’s disappointing that the AirPods Max are harder to repair than other noise-cancelling headphones, it’s not surprising. Apple hardware isn’t always hard to disassemble but making repairs can be a dicey business.

It looks like if you do buy the AirPods Max, you’ll need to face using Apple’s premium-priced, first-party services if you ever want them repaired. Something to consider when you’ll have already spent $549 USD on Apple’s new headphones.