Apple AirPods Now Available for Purchase in Canada, Delivers Dec. 20 at Earliest [u]

Apple has just launched AirPod sales in Canada and beyond, confirming a rumour they would launch in time for Christmas (that John Gruber and his “little birdies” eh?). AirPods are set to launch in Apple Stores on December 21.

AirPods cost $219 CAD and right now are shipping by December 20 for addresses in Ontario and December 23 for us in B.C, based on what we’ve ordered. 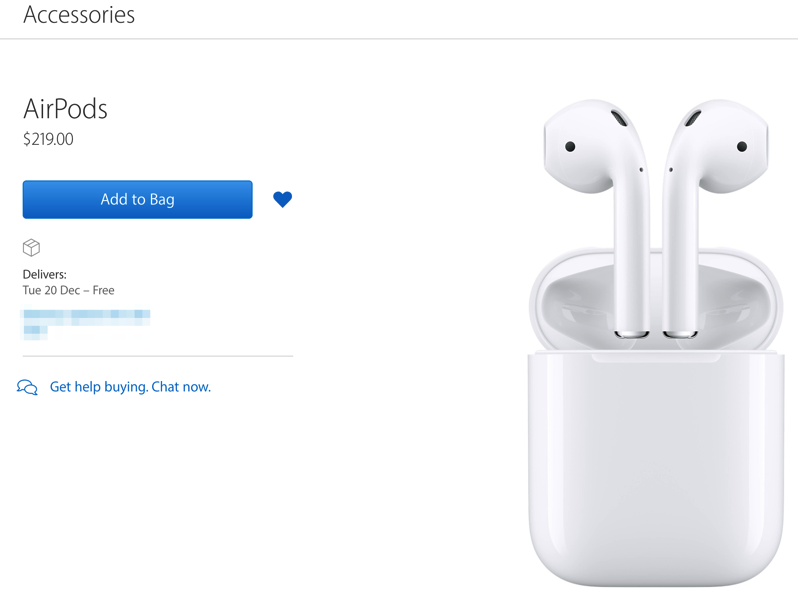 Click here to get your AirPods while they are still in stock.

AirPods were originally slated for an October release, but Apple delayed the product, as they were not ready for release, they said.

BuzzFeed says this morning “a person familiar with the product’s development said it required additional “fine-tuning” related to sound performance and battery life,” echoing a report from the WSJ.

Here’s what Apple has to say about the launch in its press release:

AirPods will be shipping in limited quantities at launch and customers are encouraged to check online for updates on availability and estimated delivery dates. Stores will receive regular AirPod shipments.

AirPods are available in more than 100 countries and territories including Australia, Canada, China, Hong Kong, France, Germany, India, Mexico, Netherlands, Japan, UAE, the UK and the US.

Let us know if you pulled the trigger for AirPods–looks like Apple managed to surprise us all and get these ready in time for Christmas.

Update 7:55AM PDT: Looks like initial pre-Christmas orders have sold out. It’s showing delivery dates of December 29 for some postal codes in Ontario, and January 5 for our BC postal code. Sorry, westcoasters just waking up now…