Apple has come out on top in J.D. Power’s latest ranking of wireless router manufacturers, with highest overall customer satisfaction. According to the J.D. Power 2016 Wireless Router Satisfaction Report, Apple’s AirPort Express, AirPort Extreme, and AirPort Time Capsule earned an overall customer satisfaction score of 876, based on a 1,000-point scale, followed by ASUS at 860, D-Link at 856, and TP-Link at 854. 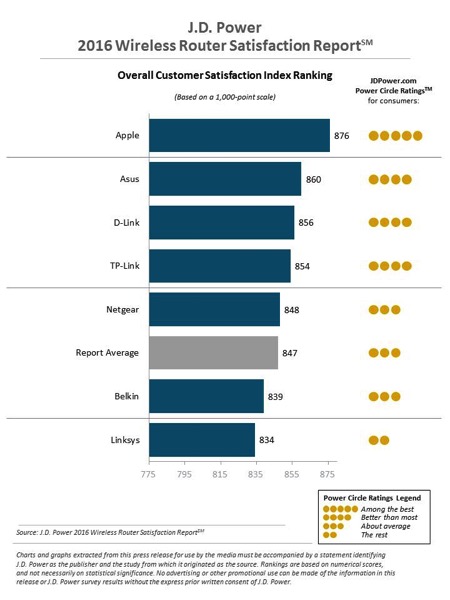 The report, which is based on responses from 3,037 consumers, also shows that Apple was the only company to receive a 5-star Power Circle consumer rating, which places it “among the best”. J.D. Power measured overall satisfaction across 10 factors, listed in order of importance i.e. Wi-Fi range, reliability, speed of upload/download, restore connection easily, security capabilities, price, ease of use, variety of features, intuitive user interface, and customer service.

“What’s critical to customers is the ability to easily establish a reliable online connection through their wireless router regardless of the type or number of wireless devices they are using, smartphone, laptop, smart TV or other wireless device,” said Kirk Parsons, senior director and telecom, media & technology practice leader at J.D. Power. “Router manufacturers providing a product that’s intuitive to set up and operate and that functions with few connection interruptions are well positioned to increase satisfaction, customer loyalty and repurchase intention.”

It is interesting to point out that only last week, Bloomberg reported that Apple is planning to discontinue wireless router development, and has already disbanded its division that develops the Airport WiFi routers.