The US Patent & Trademark Office has granted Apple a patent for all-glass design for future iPhone, iPad, and Mac models. 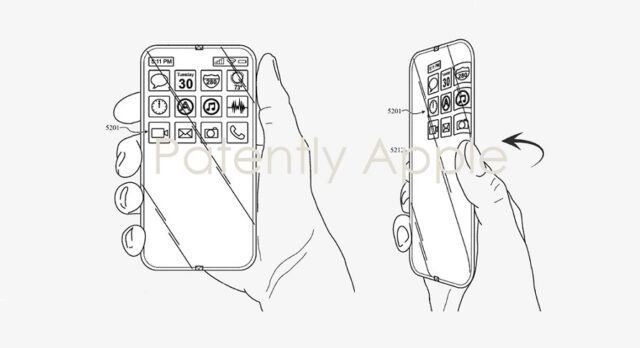 “Apple further notes that the second glass member is attached to the first glass member and defines at least a portion of a second major side of the six-sided glass enclosure,” the report continues. “The electronic device further includes a touchscreen display within the interior volume and positioned adjacent at least a portion of each of the six sides of the six-sided glass enclosure.”

The patent explains how glass may be curved, tapered, and overlapped to create an all-glass enclosure, featuring accommodations for components such as speakers and microphones. Apple also suggests that some of the glass surfaces may feature different textures to differentiate them from nearby input regions.

Another use case that such an implementation will allow is icons being draggable across multiple surfaces when swiped. Navigation will also see some pretty upgraded capabilities allowing scrolling across almost every direction.

Apple also notes that the sides of the iPhone can also be made deformable to register force-based input. For example, a user may be able to squeeze the deformable sides of the phone to lower or raise music or content volume.

That said, an all-glass iPhone isn’t the only thing on Apple’s mind. The company also mentions a Mac Pro Tower concept with a similar all-glass build but with a transparent design. An Apple Watch with an enclosure made entirely or mostly out of glass is also being considered.