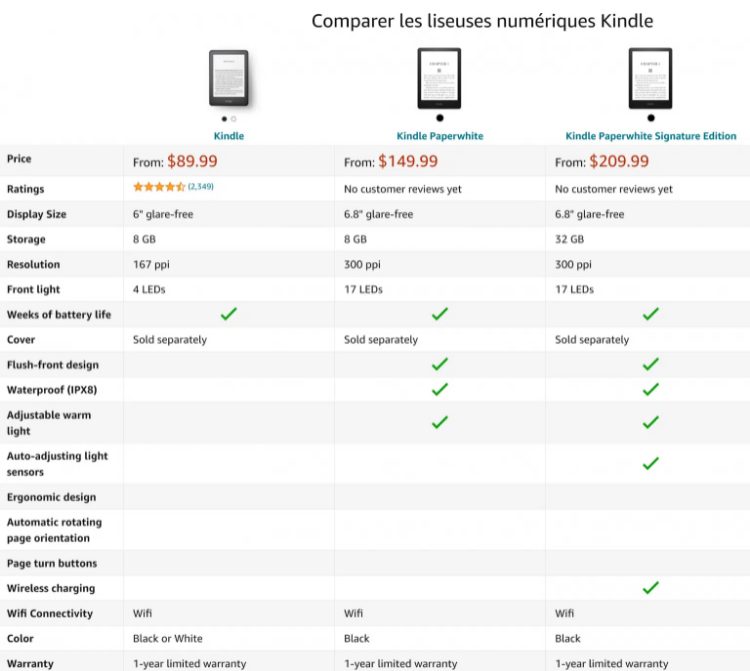 According to the publication, both new devices have been spotted on Amazon’s Canadian product description pages for the Kindle Basic and Kindle Oasis. While the Kindle Paperwhite 5 and new Paperwhite Signature Edition have product pages listed, they are not available at this time but should go live once the devices have been officially announced.

The new iteration of Amazon’s signature eBook reader will be offered in two variants: the Paperwhite 5 with 8 GB of storage for eBooks, and the Paperwhite Signature Edition with a whopping 32 GB of internal storage.

New for the first time will be integrated wireless charging for the Kindle Paperwhite 5, it appears.

Both versions will feature a 6.8″ screen with a pixel density of 300 PPI, as well as 17 white and amber LED lights in a front-lit configuration for a comfortable viewing experience in every lighting condition.

The thin, flush-with-the-bezel screen design from its predecessor will be carried over to the new Kindle Paperwhite.

Paperwhite 4 only had 5 LED lights, though, whereas the Paperwhite 5 comes with 17. The 2021 Paperwhite will also borrow the Kindle Oasis 3’s adjustable colour temperature system for added viewing comfort.

The Kindle Paperwhite Signature Edition will come with a few features the base Paperwhite 5 lacks, like auto-adjusting light sensors that automatically adjust screen brightness depending on ambient lighting, and support for wireless charging. Both devices will support Wi-Fi.

New Kindle devices have been a long time coming — Amazon recently started rolling out a major software update for the Kindle line, and the Paperwhite 4’s price was slashed by 25% last month.

The Kindle Paperwhite 5 will reportedly sell for $149 CAD, whereas the 32 GB Paperwhite Signature Edition will set you back $209.99 CAD. Amazon is expected to officially announce both devices sometime in the next day or two.

As it stands, both the regular Kindle and Kindle Paperwhite are on sale right now, which could also signal new editions are coming soon.