Amazon Compares FireTV vs Apple TV vs Roku 3, Says We Have ‘3x the Processing Power’

Back in April Amazon launched the Fire TV for $99 in the USA, as a direct competitor to the Apple TV. Now the company has taken to its homepage to again tout the FireTV’s advantages over other media players, including the Apple TV, Roku 3 and Google Chromecast.

The FireTV, according to Amazon has “3X the processing power” over the Apple TV and Roku 3, while a chart illustrates the major features and services available compared across its competitors: 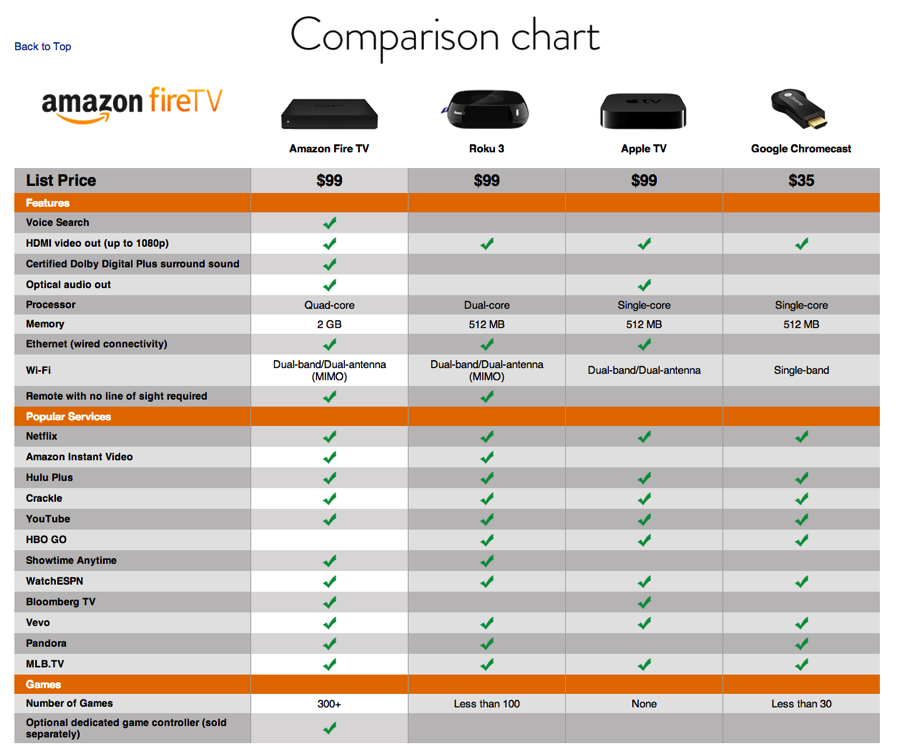 The specifications game might help you win over the crowd that favours them, but at the end of the day user experience counts too.

As much as Amazon has made a point here touting the FireTV, customer reviews on the product page seem to tell another story, with three top comments that ought to give you a few chuckles:

Amazon has previously targeted Apple in the past, as an ad from last year mocked the iPad Air and Jony Ive.

Currently, an Apple promo is offering a $25 iTunes card with all Apple TV purchases until the end of September, to coincide with the iTunes Festival in London, which starts today.

The Apple TV hasn’t had a major refresh lately, but it’s due for one sometime soon, possibly coming in 2015. It’s a great time to be a consumer if you’re looking for a media device, as competition is a wonderful thing.