Ahead of its fall iTunes Festival, Apple has re-launched its promo offering a $25 iTunes Card with new Apple TV purchases for users in the United States (via 9to5Mac). The promo was also available earlier this year back in February.

This time around, Apple has included Canada as part of the promo as well (along with Australia and European countries), as the Canadian website also reflects the gift card deal: 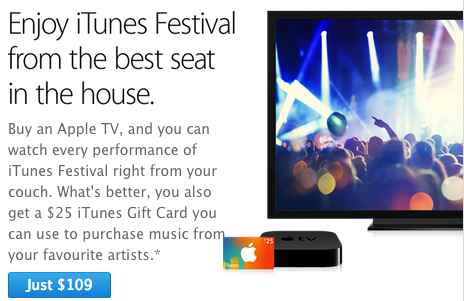 The Apple TV retails brand new for $109 CAD, but users can buy a refurbished unit for $85 from Apple’s website (not part of the promo offer), which comes with a one year warranty as well (but minus new retail packaging).

This gift card offer is available starting today and goes until September 30, 2014. If you were about to purchase an Apple TV, this just might sweeten the deal a bit more.

Following Morgan Stanley's estimate that Apple’s App store net revenue tumbled a record 5% last month, CNBC's Jim Cramer has said that investors should ignore negative calls about the iPhone maker and hold onto their shares. “The next time you hear this Apple mishegoss, you need to recognize that you’re still getting one more buying opportunity in...
Usman Qureshi
11 mins ago