Final Amazon HQ2 Cities Shortlist Does Not Include Toronto: WSJ [u]

The Amazon HQ2 shortlist does not include Toronto, Ontario, according to sources speaking with the Wall Street Journal:

Amazon.com Inc. has progressed to late-stage talks on its planned second headquarters with a small handful of communities including northern Virginia’s Crystal City, Dallas and New York City, people familiar with the matter said, as it nears a final decision that could reshape both the tech giant and the location it chooses.

The ongoing talks with some local officials come as discussions appear to have cooled in some of the other 20 cities on Amazon’s shortlist, including Denver, Toronto, Atlanta, Nashville, Tenn., and Raleigh, N.C., according to people familiar with those situations.

Amazon’s Mike Grella, Director of Economic Development Public Policy, took to Twitter to vent his frustration about the leak, saying “Memo to the genius leaking info about Crystal City, VA as #HQ2 selection.  You’re not doing Crystal City, VA any favors.  And stop treating the NDA you signed like a used napkin.” 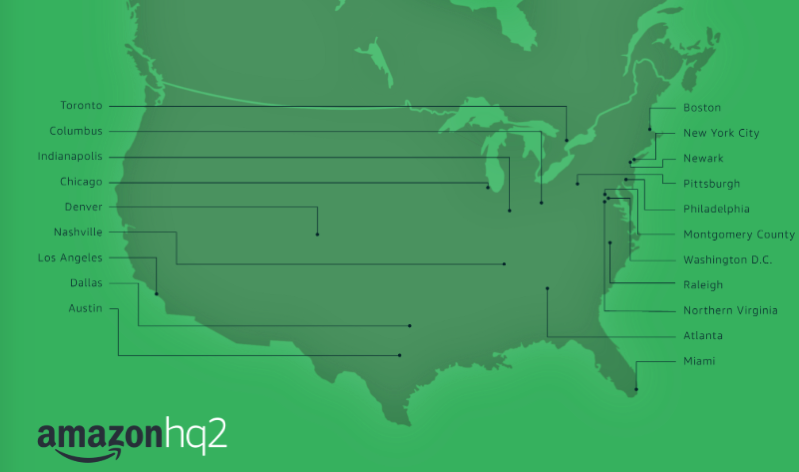 The private hunt for a second headquarters by Amazon so far has had cities doing everything possible to lure in the big tech behemoth, while some citizens fear the arrival may increase real estate prices and more, as seen in other tech cities such as San Francisco. Amazon HQ2 will add 50,000 jobs at its new location.

Toronto was one of the final 20 shortlisted HQ2 cities announced by Amazon back in January of this year. Amazon says it plans to announce its HQ2 cities by the end of 2018.

Update Nov. 5, 2018: The WSJ now says Amazon plans to split HQ2 between two cities, in an effort to find enough talent and support growth of the large sites, such as housing and more:

Amazon.com Inc. plans to split its second headquarters evenly between two locations rather than picking one city, according to a person familiar with the matter, a surprise decision that will spread the impact of a massive new office across two communities.

Today the first press reviews of Apple’s HomePod 2 hit the web, along with unboxing videos. The second-generation HomePod sports a similar design as its predecessor, has a 4-inch woofer and five tweeters (down 2 from before), plus gains a built-in temperature and humidity sensor, along with automatic room sensing for adjusting audio to your […]
Gary Ng
50 mins ago