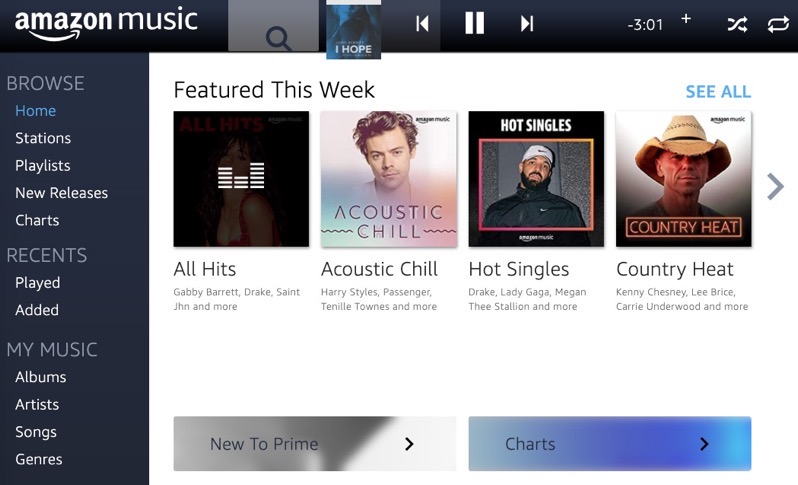 If you have an Amazon account but you aren’t a Prime member, you can now listen to an ad-supported version of Amazon Music, starting today.

Amazon Music told iPhone in Canada in a statement, “customers in Canada who do not yet have a Prime membership, or a subscription to Amazon Music Unlimited, can now listen to an ad-supported selection of top playlists and thousands of stations for free on their favourite devices.”

This ad-supported version of Amazon Music is available on Echo devices, the Amazon Music app on iOS and Android, Fire TV and the web at music.amazon.ca.

Amazon Music says no subscription or credit card is required, with “thousands of stations” available based on any song, artist era and genre, to go with the service’s top global playlists and stations such as:

If you have an Alexa-powered device, you can also say something like:

Last fall, Amazon launched an ad-free version of Amazon Music for non-Prime members in the U.S., UK and Germany, but that version doesn’t appear to be available in Canada anytime soon.

The new ad-supported plan of Disney+ is now live in the U.S. at $7.99/month. Dubbed Disney+ Basic, the plan is expected to become available in Canada and other countries next year (via Reuters). Over 100 advertisers and brands, from LVMH to Marriott Hotels & Resorts, are participating in the launch, which Disney has been promoting...
Usman Qureshi
38 mins ago

Airbnb has announced heightened defenses to help prevent disruptive parties over the New Year’s Eve weekend in 11 countries, including Canada. New restrictions will see a ban on certain one-night bookings during New Year’s Eve for entire home listings across Canada. These defenses are in effect for guests without a positive account history, or no...
Usman Qureshi
52 mins ago