Despite ranking no.1 last year, Amazon has slipped to no. 4 globally in shopping app installations for 2021, according to competitive intelligence platform Apptopia. 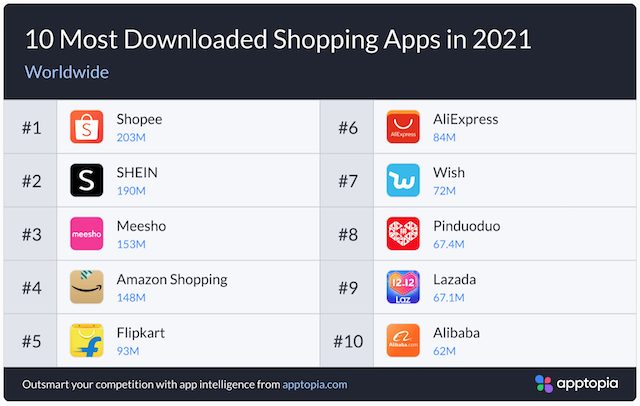 This year, three e-commerce companies have overtaken Amazon in the global rankings. Shopee, based in Singapore, which serves Southeast Asia and Latin America, was the most installed shipping app in 2021.

Shein, based in China, a leader in “fast fashion” came in at no.2, and Meesho, based in India, which specializes in social e-commerce for categories including fashion and home products, took the third spot.

Responding to regulators in the U.S. and elsewhere, Amazon executives have repeatedly made the case that the company’s small share of the global retail market, including online and offline sales, falls short of the market power that would warrant aggressive antitrust action.

However, as of a few months ago, Amazon was expected to account for more than 40% of U.S. e-commerce sales in 2021, according to eMarketer.

Amazon is, however, still first in Apptopia’s U.S. rankings for shopping app installs in 2021.