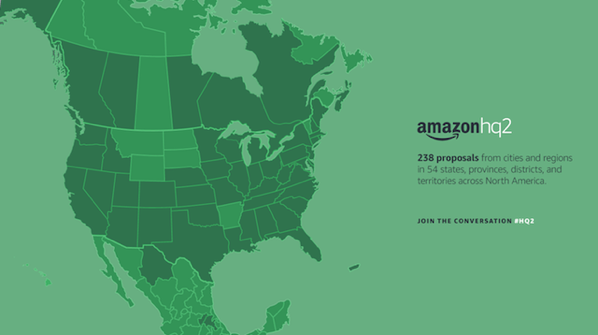 Amazon has today announced that it has received a total of 238 proposals for its massive HQ2 contest from 54 states, provinces, districts, and territories across North America, adding that it will be reviewing each one of them. According to GeekWire, the numbers are higher than many previous estimates, illustrating the intense interest in landing Amazon’s $5 billion second headquarters campus.

For the past month and a half, cities have been bending over backward to get Amazon’s attention. New York City lit up in “Amazon orange,” Birmingham, Ala. placed three giant Amazon delivery boxes around town, and Stonecrest, Ga. pledged to create the “City of Amazon.” Even Amazon’s hometown, Seattle, made a hail mary attempt to get the tech titan to keep HQ2 close to home.

With more than 200 competitors, it’s not hard to see why these regions pulled over-the-top stunts to get on Amazon’s radar in the weeks leading up to the company’s deadline.

Amazon says the HQ2 announcement will come sometime in 2018 and construction will begin in 2019. The company also included some glimpses into the criteria it will use to judge proposals, such as a metro area with more than 1 million people, quality transit options, and incentives from local governments.

We received 238 proposals from across North America for #HQ2. The team is excited to review each of them! https://t.co/bEabxtWgiq pic.twitter.com/F1KAHyfSzp

These incentives, according to Amazon, could come in the form of tax credits and exemptions, relocation and workforce grants, utility incentives, and fee reductions. The company is also encouraging communities to “think big and creatively” in their proposals.

The winner will get up to 50,000 jobs and a $5 billion investment that Amazon says HQ2 will bring. For more information, click here.