Ahead of Apple Pay Launch in Canada, ‘Amex CA’ Surges in the App Store

With American Express being the first confirmed launch partner for Apple Pay’s imminent launch in Canada, interest in the company is surging, based on its popularity in the App Store.

Currently, the American Express Canada iPhone app has vaulted to the 7th spot in the Top Free Apps ranks, when previously it was never in the top 10. 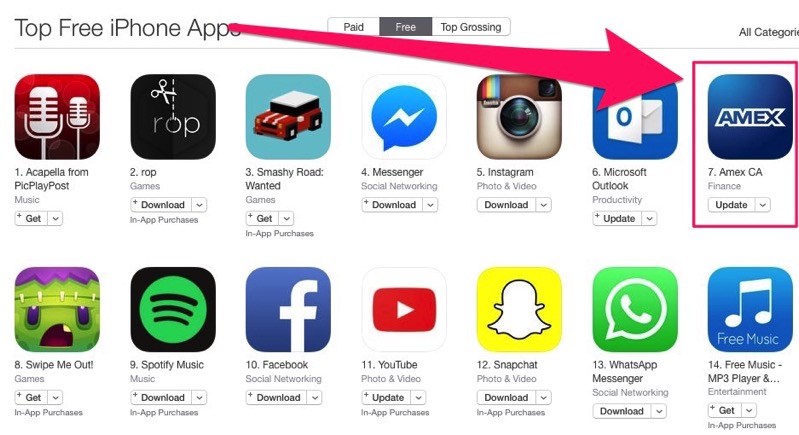 The app’s recent spike in downloads means it has surpassed popular titles such as Spotify, Facebook, YouTube, Snapchat and WhatsApp in the Top Free iPhone Apps list.

Yesterday, American Express started advertising on Facebook, informing Canadians “Amex Cardmembers will be the first to use Apple Pay in Canada,” which clearly has many people excited.

Canadian banks are said to be involved with Apple Pay, based on a recent leak by TD Canada Trust; meanwhile, sources say BMO has plans too, while RBC may be involved as well.

Looks like the partnership with Apple may be paying off for American Express, which currently has about four million members in Canada (Visa and MasterCard has over 70 million combined).

[caption id="attachment_390033" align="aligncenter" width="960"] Image: Microsoft[/caption] Microsoft on Tuesday held an in-person event in Seattle, Washington, where the company announced a number of new AI-centric innovations coming soon to its products (via The Verge). The highlight of the event was Microsoft unveiling "the new Bing," powered by a new next-generation large language model under a...
Nehal Malik
19 hours ago