Nearly a week ago Apple CEO Tim Cook delighted Canadians listening to the company’s Q4 2015 earnings call, when he announced Apple Pay would be coming to Canada for American Express cardholders before the end of 2015.

Now, American Express has started to tease their Apple Pay arrival in Canada via sponsored posts on Facebook, touting their support of the mobile wallet is “coming soon”, as spotted by iPhone in Canada reader Hussein. The ad reads “Get excited! Amex Cardmembers will be the first to use Apple Pay in Canada”: 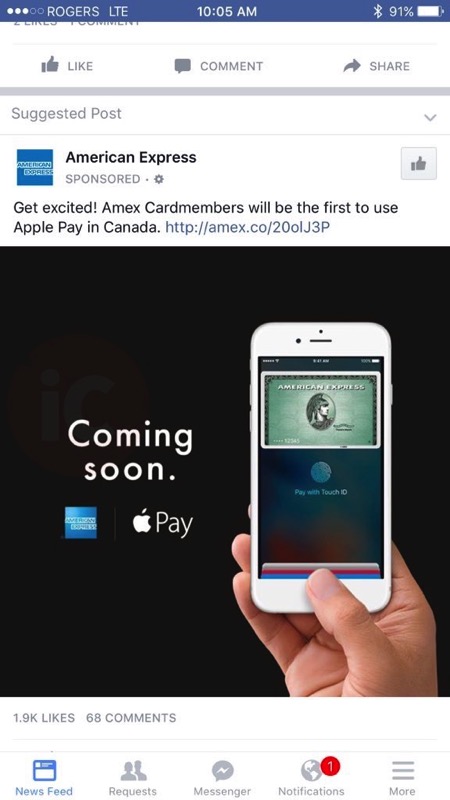 The ad’s link directs users to the American Express website and its list of available cards. The credit card company similarly posted the same thing on their Facebook page (thanks Varun).

Note the ad doesn’t say American Express is an exclusive Apple Pay partner here, so for all those people freaking about about big banks not announcing anything yet, I would stay tuned.

So far we’ve already seen TD Canada Trust accidentally leak support for Apple Pay, while sources claim BMO has plans underway, along with RBC as well. Here’s what Scotiabank responded when we asked them about Apple Pay on Twitter (we weren’t expecting a real answer by the way):

@iPhoneinCanada We reg evaluate all mobile payment solutions. We proudly offer My Mobile Wallet & continue to build on this platform. ^RH

Apple Pay will also launch this year in Australia with American Express, while Singapore, Spain and Hong Kong are geared to get the feature in 2016.

Did you sign up for an American Express card after hearing the Apple Pay announcement?

Apple Watch Ultra, Apple's most premium smartwatch to date, officially launched on Friday. The new high-end smartwatch targets extreme athletes, and it comes with a choice between three different bands to aid in their adventures: the Alpine Loop, the Trail Loop, and the Ocean Band. Each of the three band types was thoroughly tested and...
Nehal Malik
35 mins ago

According to a report from The Verge's Umar Shakir, a firmware update Apple started rolling out for AirPods Max in May significantly reduces the strength of the premium headphones' Active Noise Cancellation (ANC), according to his observations. Apple's most expensive AirPods have pretty strong ANC. It is (or at least was) strong enough that some people...
Nehal Malik
42 mins ago