American Express has emailed customers to inform them of “an important update” to Apple Pay, which will require users to remove, then re-add their AMEX card to Apple Pay, in order to install the update.

This update will allow customers to “start using Apple Pay at more merchants coming soon,” noting “removing and re-adding your Card is easy, and will only take a moment.”

AMEX explains this is a “one-time update” and future iOS and merchant expansions will not require customers to repeat these steps every time. 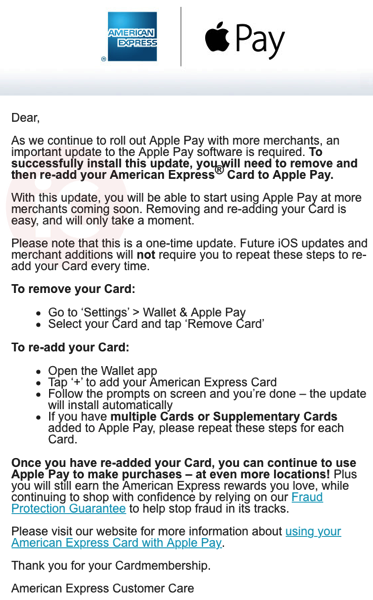 This is somewhat odd American Express is making customers re-add their card, but for existing Apple Pay users, they probably already know how to do this.

How to remove your card? On your iPhone, go to…

To re-add your card, just launch the Wallet app and tap the “+” icon in the top right, add your AMEX and follow the on-screen prompts.

The timing of this email will remind conspiracy theorists of the recent rumour which claimed Apple Pay is set to expand to Visa and MasterCard in Canada soon; for now we’re waiting for that to actually happen, so don’t get your hopes up.