Apple will announce its fourth quarter results, and before that, as usual, analysts have done the math based on information obtained through various channels. The Fortune survey has gathered the highest and lowest amateur and professional analyst forecasts, with the consensus being that revenues were up 3% in fiscal Q4, and earnings down 6% compared to a year ago.

As you can see from the spreadsheet below, the spread between the amateurs and professionals varies, but both the highest and lowest estimates come from Wall Street. The highest expectation comes from Shelby Seyrafi of FBN, who expects Apple to report $39.18 billion in revenue, up 9% from last year, while the lowest comes from Brian White of Cantor Fitzgerald, who projects $34.57 billion in revenue for Q4, down 4%.

Amateurs were too much below, the highest indie forecast signed by Chuck Jones of Sandy Hill Insights, expects Apple to report $38.10 billion in revenue, with 36.30 million iPhones, 4.40 million Macs, and 13 million iPads sold.

The Q4 results are important, because 2013 marks the second year since Steve Jobs passed away, and analysts are eager to see whether Apple can make stuff fast enough to meet demand, whether the company will make pricing mistakes, and how the company will perform in developing markets. 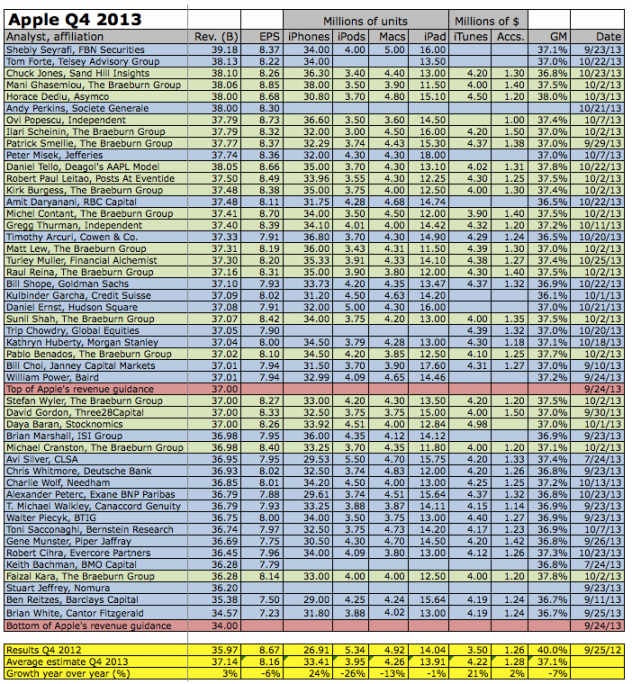