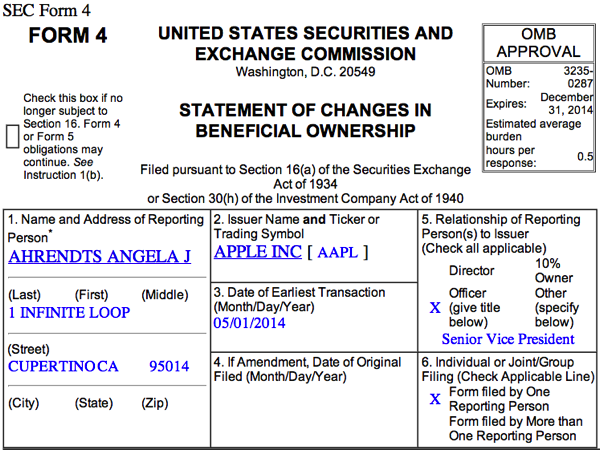 Earlier today an SEC filing revealed Apple had awarded its new retail chief Angela Ahrendts 113,334 restricted shares of AAPL worth over $68 million based on today’s closing price of $600.96 per share.

Restricted stock units (RSUs) are distributed based on a vesting plan and tied to company performance. The vesting schedule gives an incentive to employees to stay with the company to redeem their shares. Her vesting schedule is as follows:

Apple has long given its top executives RSUs, including CEO Tim Cook.

Ahrendts, the former CEO of Burberry, officially joined Apple last Friday as she made her way onto the company’s Executive Profiles page. 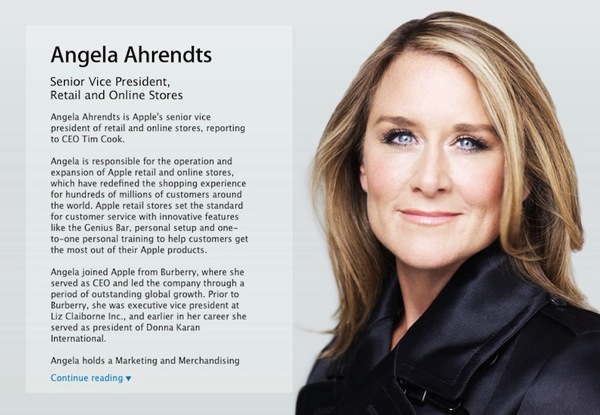 The new retail chief has been busy on her first week on the job, as 9to5Mac reports she will lead a new iPhone upgrade program at U.S. Apple retail stores to boost sales:

Apple is planning to hold an “enormous” iPhone-related event in its stores this week in order to boost sales, according to a source with knowledge of the initiative. Beginning May 8th, the source said, Apple will be contacting upgrade-eligible iPhone users with older iPhone models via email to come into their local Apple Store to update to a new iPhone 5s or iPhone 5c.

This program blends nicely with Apple’s Apple Store-based iPhone hardware trade-in program, which allows customers to turn-in older iPhone models to purchase a new model at a discounted price. Apple, in recent weeks, has increased the buyback prices for iPhones in its trade-in-program, according to a source.

Mark Gurman told us he’s not sure if this upgrade program will make its way into Canada, but regardless we have seen some aggressive iPhone 5s and iPhone 5c discounts by carriers lately though.