Rovio has announced Angry Birds Friends, a game exclusively launched on Facebook last May, will soon have its own iOS app for the iPhone and iPad. This latest addition will allow iOS users to challenge their Facebook friends in various weekly tournaments:

Pop some piggies with your friends wherever you are! Angry Birds Friends spruces up the classic Angry Birds experience with fun new social features that integrate with Facebook. For the first time ever the fans of Angry Birds can use their mobile to challenge their Facebook friends in weekly tournaments for the coveted bronze, silver and gold crown on the levels. Gather daily rewards, send and receive gifts of power-ups with your friends and brag about your accomplishments. 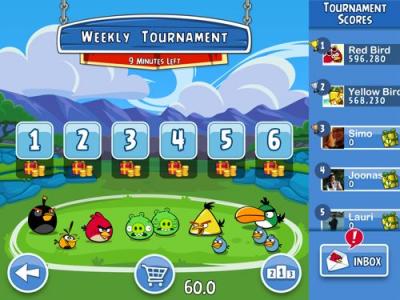 The company earlier today announced its 2012 earnings and noted its growth continues at an incredible pace. Sales are up 101% compared to 2011 to $195 million, as net profit hit $71 million. 45% of revenue is now coming from the company’s vast array of consumer products. The popularity of Angry Birds continues to remain strong and grow globally. It’s pretty impressive.