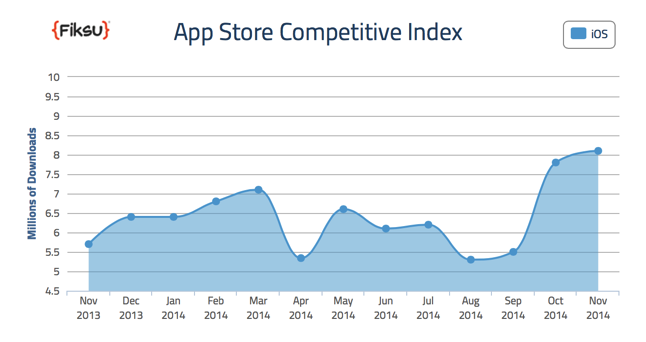 Micah Adler, CEO of Fiksu, said that the trend is expected to continue over the December holidays and even into January. He added that the increase in downloads has also contributed to decreases in the costs required to acquire users, which is “a key part to growing any mobile app business”. The Cost per Loyal User Index declined 27% to $1.58 in November, down 12% year-over-year. The marketing firm further notes that the cost to acquire loyal users has decreased because overall loyal users on mobile seem to be growing.

“Because those downloads were considered “organic” – meaning users were downloading apps on their own, not because of advertisements or other marketing campaigns – the costs associated with those marketing efforts decreased. But they’re sure to creep back up this month and the next, after the Christmas holidays, as mobile companies traditionally compete more fiercely to be among the first apps installed on new mobile devices, often received as holiday gifts”.

You can read Fiksu’s full report at this link.