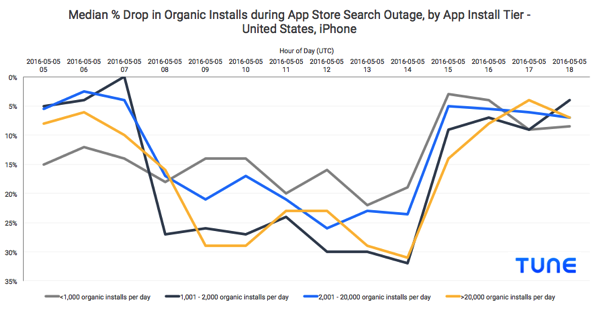 Last week’s App Store issues caused headaches for users who, for several hours during the morning on May 5th, were unable to surface apps using keyword searches. This affected top apps like Uber, Spotify, Google, YouTube, Tumblr and many others, as well as apps from smaller developers.

Users on Twitter and Reddit starting noticing the problem in the early morning on the 5th, and then Apple’s own status page reported the issue as resolved by 8 AM PT that same day. Tune confirms that the outage appears to have started impacting organic installs around midnight, but continued until 6 AM PT – a bit later than Apple says.

Apparently everything didn’t go back to being 100% normal as soon as the App Store’s status returned to green. In fact, organic installs continued to rebound between 6 AM PT and 7 AM PT, notes the source. It’s interesting to point out that those apps affected the most were some of the “best” apps, meaning those that regularly saw a substantial number of organic installs.

Over 40% of the smaller-scale apps saw less than a 10% drop in installs, while almost 50% of the large-scale apps saw a 21 to 50% drop in organic installs during the 6-hour glitch. Apple has yet to comment on what caused the outage.