Apple released new data for its iOS 12 install rates, as the latest mobile operating system is now running on 80% of all devices, as measured by the App Store on February 24, 2019. 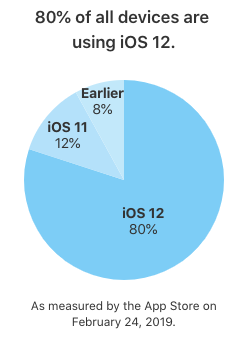 Apple’s developer page also notes “83% of all devices introduced in the last 4 years are using iOS 12.”

Expect Apple to utilize and tout these iOS 12 stats at their expected March special event, where the company is said to introduce a news and video subscription service.