Will Apple AirPods Fall Out if You Jog or Dance?

Apple debuted the all new ‘AirPods’ wireless headphones yesterday, featuring innovative hardware and software technologies aimed at reinventing how we listen to music, make phone calls, play games and interact with Siri. While I was thoroughly impressed by Apple’s presentation of the new accessory during the iPhone 7 launch keynote, I had two main concerns which needed to be addressed before deciding whether I want them or not. 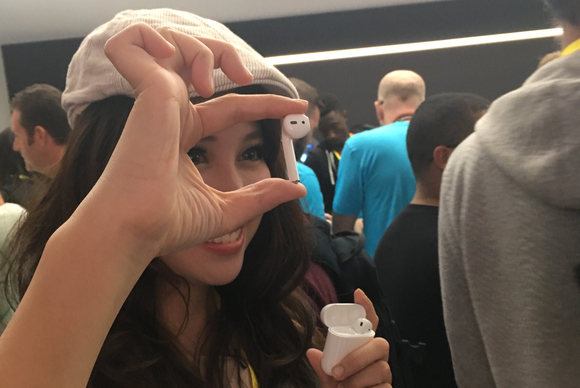 First, will the AirPods fall out of my ears when I jog or dance? And second, will they hurt after wearing them for a while like the regular EarPods do? Luckily, a hands on test of Apple’s tiny headphones by Macworld’s Susie Ochs seems to have answered both my questions. Here’s what she says:

“I found myself dancing along in spite of myself—and the AirPods stayed put, feeling surprisingly secure. I hate how normal EarPods feel in my ears. They don’t seem like they’re going to stay put, and they simply fall out if I move my head too much. Even if they do stay in, after about a half hour, my ears just start to ache, although I don’t experience the same pain when using earbuds with silicone or foam tips. Since the AirPods look so similar, I expected them to feel the same too—and I’m surprised and happy to report that I was dead wrong”.

Not only did she dance around, she headbanged, shaking her head side by side and tossing her hair as she jogged in place (looking silly doing all of that). But the end result was, “the AirPods stayed put, and they stayed loud”.

Of course we’ll know more about the sound quality, battery life and other minor details once a few audiophiles review the AirPods, but nonetheless, if the idea of AirPods falling out while you run is holding you back from splurging out $219 CAD once they are available to order in late October, then rest assured they won’t!

Microsoft has revealed the first wave of Xbox Game Pass titles arriving on the service throughout October 2022. Kicking off the month, many of the games capture the spirit of the spooky season, leading into Halloween. This month, Xbox Game Pass subscribers can gain access to brand new titles available day and date such as...
Steve Vegvari
3 mins ago