Apple has long been rumoured to be working on an augmented reality headset, and a newly published Apple patent may give us a better look at what that headset could end up looking like. 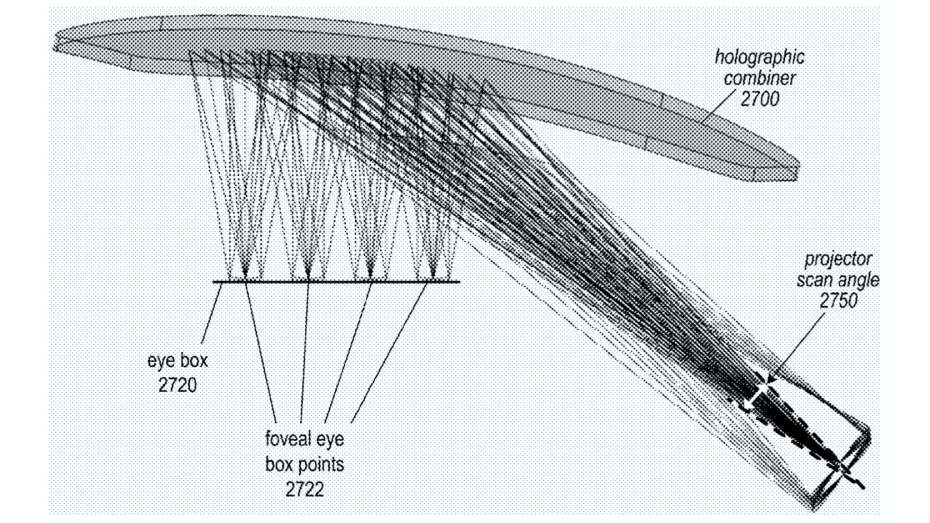 The patent, which was filed with the United States Patent and Trademark Office back in March, establishes that Apple is still working on the novel display technology, regardless of a potential shipping timeline.

The patent describes that instead of using a display to show off information, the AR-enabled glasses may make use of a “reflective holographic combiner” to display an image. In other words, the headset will reflect an image off the lens of the glasses, functioning somewhat like a projector.

“While the technical details of the application are complex, the innovation appears to be a projector that beams multiple tiny points of light onto a lens, creating a hologram that can be seen within a specific ‘eye box’ area,” reads a report from Venture Beat. “Unlike a flat screen inserted within the lens, the projected hologram would appear to have multiple fields of view, and thus three-dimensional depth that would match both the user’s eyes and ambient environment.”

This specific patent also focuses on “accommodation-convergence mismatch problems,” which is an issue where an image is overlaid on an environment without taking into account depth of field. This can create a range of issues, including eyestrain and nausea — but the tech in the patent helps eliminate these issues.

Despite these revelations, it could be some time before an Apple augmented reality headset could get released to the public. Apple may have been working on the tech for some time, but most rumors and analysts suggest the tech won’t be released until at least next year, and possibly later.

When it does launch, the headset is expected to connect to the iPhone, similar to how the Apple Watch did when it was first released — and still does in many ways. Once it is released, the headset could jump-start what many expect to be a new major wave in technology.

SpaceX has introduced a new ‘Sleep Schedule’ features in its Starlink app version 2023.03.0, which should help users save energy during sleeping hours (via Tesla North). As spotted by Nathan Owens, the feature toggles a power-saving mode, causing the dish to report an outage reason as ‘Sleeping' during the pre-set hours. This Starlink feature has launched...
Usman Qureshi
4 hours ago