Apple has just listed three different 2014 Mac Mini configurations in its refurb store, the first time ever for the 2014 model, with the lowest priced model starting at $469, which is 14% off, savings of only $80. So if you’ve been waiting for the latest Mac Mini to hit the refurbished store in Canada, now is the time to grab one (I’m sure Gary will be quite interested :P). 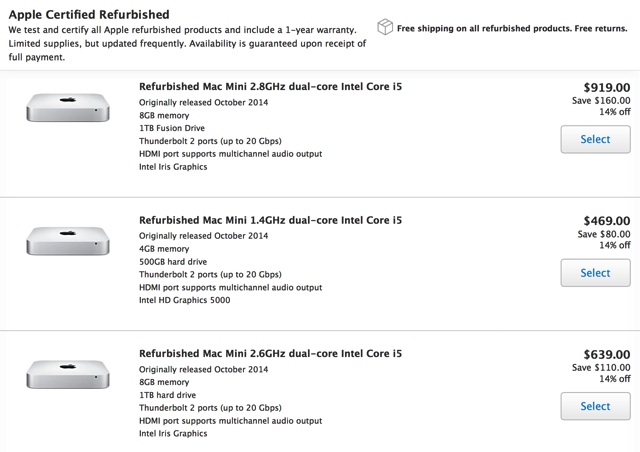 Small, not overly expensive, and capable of accessing media locally as well as online, the Mac mini offers great advantages as a media server. It sports an HDMI port, which allows you to connect it directly into your TV, and the included SDXC card slot allows for directly accessing the pictures stored on a camera’s memory card. It also has an IR receiver and comes with Apple’s remote, so it can be controlled from the couch, carries a gigabit ethernet port and it supports digital audio in and out.

I’ve been using one as a media server hooked up to my lounge TV for the past few years and I’ve never felt the need for getting an Apple TV, a Roku device or any other media streaming box.