Yesterday it was noted International Apple Stores posted their Black Friday teasers, and today Apple Canada has done the same (just like the U.S, as noted by The Loop), exactly three days before the sale, just as I predicted (I’m psychic!).

Upon visiting the online store, you’ll see a banner that reads ‘Every gift list has its day.’ The official Black Friday landing page reads:

The special one-day Apple shopping event.
This Friday, November 25.
Mark your calendar now, and come back to the Apple Online Store for the special one-day event. You’ll discover amazing iPad, iPod and Mac gifts for everyone on your list. 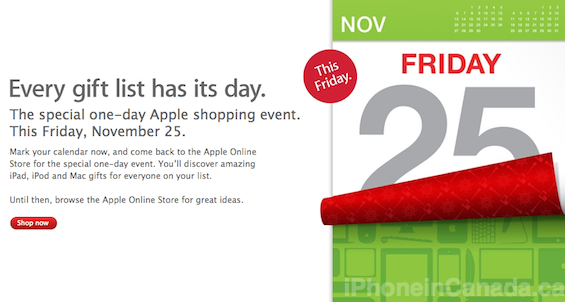 Typically, the Black Friday sales resemble education discounts but are extended to more products and accessories. Apple is definitely gearing up for the holidays, as they previously introduced their holiday gift guide. Click here for the list of discounts from last year’s event.