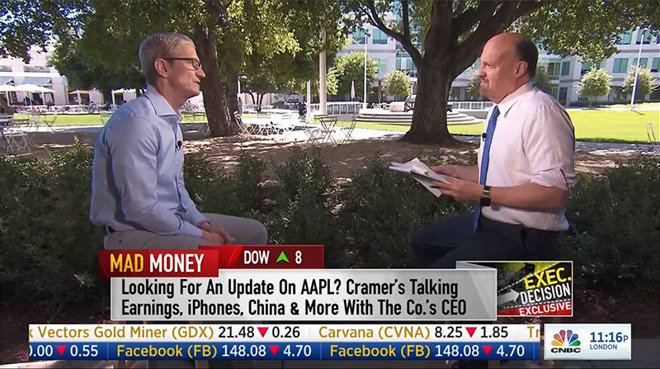 Apple CEO Tim Cook sat down for an interview with CNBC’s Mad Money host Jim Cramer this evening, where he discussed Apple’s recent earnings results, an upcoming investment fund, the iPhone’s impact on consumers, job creation, and the company’s overall impact on the world.

During the interview, Cook announced plans to create an advanced manufacturing fund with a $1 billion investment to help create many manufacturing jobs in the United States. Cook said:

Cook added that Apple will announce the first investment later in May. Job creation and investment in the developer community was also a focus in the interview, with Cook saying that we can expect to hear more about this during the summer.

The fund comes as President Donald Trump has made a big push to bring back manufacturing jobs into the country, and it fits into Apple’s larger effort to create more jobs in the United States. Cook also highlighted the $50 billion Apple spent purchasing from U.S manufacturers over the last year, including sourcing materials from 3M (adhesive) and Corning (glass on iPhone and iPad).

So far, Apple has created about two million jobs in America, 1.5 million of which are attributable to developers that are publishing their apps to the App Store. The company also has 25,000 employees working on research and development in California, as well as 6,000 people in Texas, working in Research and Development, in addition to other sectors.