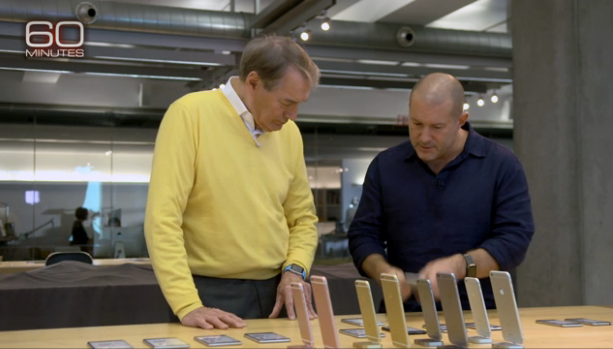 You don’t see correspondents invading the news with footage from Apple’s headquarters featuring “the brains of Apple”. CBS’s Charlie Rose, however, had the “privilege” of visiting the building and entering the office before the usual meeting of all Apple execs takes place each day at 9 a.m. He then sat down and discussed various topics with Tim Cook, Jony Ive, Phil Schiller, Eddy Cue, and others. Yes, it is the 60 Minutes’ story CBS aired last night.

Rose even entered Ive’s design studio but found the tables in the room covered. When he asked why, Ive answered: “That’s so you can’t see what’s underneath, Charlie,” and added that “you’d know what we’re working on next. And so that’s one of the reasons it’s extraordinarily rare that people come into the design studio.”

Ive showed Rose 10 different sized models of the iPhone 6, saying that they chose the two available now in stores because “partly they just felt right . . . they somehow . . . not from a tactile point of view, but just emotionally they felt like a good size.”

Alongside the Apple Watch prototype, Rose found another: A mock store where Apple’ head of retail Angela Ahrendts is refining the next-generation Apple Stores. She explains what her goal with the new design is:

The most important goal is, is that it is dynamic. People are used to living on their phone. So they’re used to being dynamic, emotive, immersive. And so how do we make sure when they walk into a store they say, “Wow”?

Charlie Rose: Is there danger of one product cannibalizing the other product?

During the conversation with Cook, they touched on various subjects, such as privacy, and Apple’s CEO once again reiterated his position: “I don’t believe that the trade-off here is privacy versus national security,” he said.

An interesting highlight of the interview is an explanation of why Apple chose Foxconn to assemble its products: It’s not the wage, it’s skill, Tim Cook emphasized.

Tim Cook: Yeah, let me– let me– let me clear, China put an enormous focus on manufacturing. In what we would call, you and I would call vocational kind of skills. The U.S., over time, began to stop having as many vocational kind of skills. I mean, you can take every tool and die maker in the United States and probably put them in a room that we’re currently sitting in. In China, you would have to have multiple football fields.

Charlie Rose: Because they’ve taught those skills in their schools?

The whole interview is well worth your time. You can watch the video below or read the script in “Inside Apple” by following this link.