Apple released its ‘Clips’ iOS app back in April for making and sharing fun videos with text, effects, graphics, and more. Today, it has received a significant update, bringing tons of new banners, overlays and posters for video clip presentations, as well as characters from Disney and Pixar. 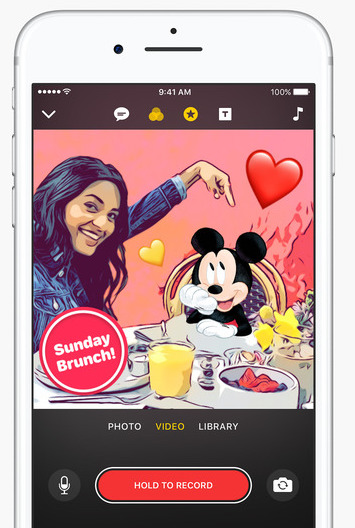 The update brings Disney’s primary characters of Mickey and Minnie Mouse, as well as Daisy and Donald Duck. Characters from Pixar films “Toy Story” and “Inside Out” have been added as well. Apple has also added tons of new graphic overlays and animated poster designs to enhance text-based additions that are added to videos.

Those who aren’t familiar, Apple’s Clips app allows users to combine short videos on a timeline, with an upper limit of 60 minutes or over 300 individual segments. Users can then enhance their project with things like filters, symbols, and emoji, as well as “Posters,” which are fullscreen text-based images used as title cards.

Click here to download Clips for iOS in the App Store—It’s free and requires iOS 10.3 or later.