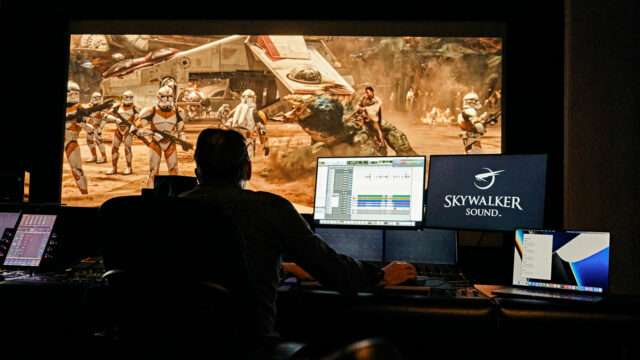 In celebration of May the Fourth, aka Star Wars Day, Apple has released ‘Behind the Mac: Skywalker Sound.’ The short film pulls the curtain back on LucasFilm’s Skywalker Sound division, responsible for the audio in Star Wars and other iconic franchises.

Skywalker Sound plays an intregal role in many of the films seen today. Established back in 1975, this division has worked across the Star Wars franchise as well as Indiana Jones, Pirates of the Caribbean, and other Disney properties. Apple is spotlighting them as much of the studio’s contemporary work is done on Mac products.

The LucasFilm audio division uses 130 Mac Pro racks, 50 iMac, 50 MacBook Pro, and 50 Mac mini computers running Pro Tools. All of these devices are remotely connected to a central machine room. Additionally, Skywalker Sound utilizes the power of iPhone, iPad, and even Apple TV across production. Even the Apple PowerBook has a role within the studio.

Ben Burtt, a sound designer who has worked on Star Wars since the original trilogy, says that he started working on Macintosh SE. “Word processing was a huge leap forward for me as a writer,” Burtt states in Apple’s press release. Though Mac continues to be a powerful tool in his sound editing.

“Sound editing in a way is really the same as word processing; cutting and pasting files,” Burtt continues. “All the experience I had on the Mac immediately gave me training for what came along in cutting digital sound. I started cutting using a Mac with Final Cut in the late ‘90s, and now have four Mac computers. Each handles a different process: one for picture editing, sound editing, manuscript writing, I’m completely surrounded. They’re labeled Alpha, Beta, Gamma, Delta.”

Supervising sound editor at Skywalker Sound Baihui Yang added how crucial it was to have access to Apple’s Pro Tool when recording on the field.

“We can bring the Pro Tools session with us in the field and watch and record and quickly put it together, to test whether it works or not. If you bring all the recordings back to the studio, you don’t know if you’ve missed the moment.”

On Monday, May 9, 2022, Apple is hosting an online Today at Apple session with Skywalker Sound’s Leff Lefferts and Apple Music’s Eddie Francis. The session will feature footage from Skywalker Ranch and the chance to learn from an Apple Creative Pro how to make vocal effects for a character using their voice, everyday objects, and GarageBand. Interested participants can sign up here.

Apple is in some hot water once more as a federal lawsuit regarding its AirTags has been issued in San Fransisco court. Two women filed to sue the company, with one alleging that an AirTag was used by an ex-boyfriend to stalk them. The lawsuit was filed this week and largely criticizes Apple's safety protocols...
Steve Vegvari
2 hours ago