This should be somewhat worrisome–the Washington Post reports on a massive story where a covert National Security Agency (NSA) program called PRISM has been mining data from nine American companies, with Apple being one of them, according to internal documents. Mined data included emails, video and voice chats, photos, social networking details and more:

Through a top-secret program authorized by federal judges working under the Foreign Intelligence Surveillance Act (FISA), the U.S. intelligence community can gain access to the servers of nine Internet companies for a wide range of digital data

Data taken by the NSA claims to be directly from company servers:

Equally unusual is the way the NSA extracts what it wants, according to the document: “Collection directly from the servers of these U.S. Service Providers: Microsoft, Yahoo, Google, Facebook, PalTalk, AOL, Skype, YouTube, Apple.” 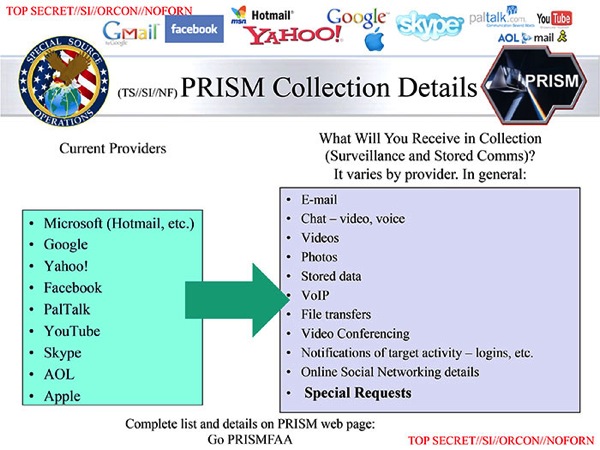 Apple has declared it has no knowledge of PRISM and does not provide access to any government agency to its user data:

House Intelligence Committee Chairman Mike Rogers (R-Mich.) did comment on the program, saying it has been effective in stopping terrorist attacks over the last few years:

“Within the last few years, this program was used to stop a terrorist attack in the United States. We know that. It’s important. It fills in a little seam that we have,” Rogers said. “And it’s used to make sure that there is not an international nexis to any terrorism event if there may be one ongoing. So in that regard, it is a very valuable thing.”

Could you imagine having every email, picture, video, voice call and more of yours stored and tracked by the US government without you knowing? Is it worth it to violate consumer privacy for the safety of the greater good?