Spotify, the world’s leading streaming music company, has said in a letter sent this week to Apple’s top lawyer, that the Cupertino tech-giant is making it harder for them to compete by blocking a new version of their iPhone app, Recode reports. “Apple is causing grave harm to Spotify and its customers by rejecting an update to Spotify’s iOS app”, notes the letter sent by Spotify general counsel Horacio Gutierrez to Apple general counsel Bruce Sewell. 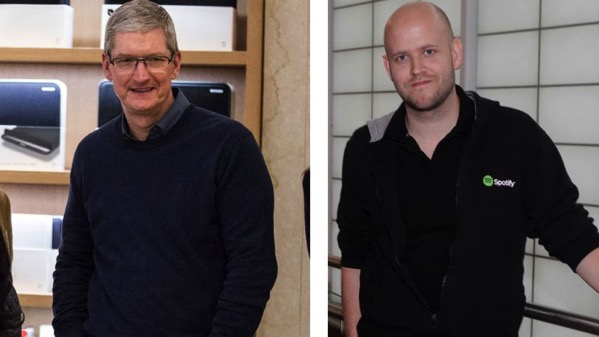 According to the letter, Apple rejected a new version of the Spotify app citing “business model rules” and demanded that Spotify use Apple’s billing system if “Spotify wants to use the app to acquire new customers and sell subscriptions”. The letter further states that Spotify intends to use the standoff as ammunition in its fight over Apple’s rules governing subscription services that use its App store. Spotify has also distributed copies of the letter to some Congressional staff in Washington, D.C.

“This latest episode raises serious concerns under both U.S. and EU competition law,” Gutierrez wrote. “It continues a troubling pattern of behavior by Apple to exclude and diminish the competitiveness of Spotify on iOS and as a rival to Apple Music, particularly when seen against the backdrop of Apple’s previous anticompetitive conduct aimed at Spotify … we cannot stand by as Apple uses the App Store approval process as a weapon to harm competitors.”

Yesterday, Senator Elizabeth Warren criticized Apple, Amazon and Google for what she called anticompetitive practices; Warren said that “Apple has long used its control of iOS to squash competition in music.”

Spotify has been arguing to various regulators in the U.S. and Europe for the past one year that Apple’s subscription policies effectively punish third-party music services that use Apple’s platform, in order to promote company’s own Apple Music service.